Judge Cuts
6 Pack Lapadat, whose real name is Ryan Lapadat, was a strongman act from Season 10 of America's Got Talent. He was eliminated before the Judge Cuts.

Like most young boys, Ryan "6 Pack" Lapadat dreamed of helping others with superhuman strength. Like most men, those dreams faded as he grew older and built himself a regular life. At 28 years old, tragedy struck his family, leaving him feeling the most helpless he ever had. The dream of being a superhero came back to life and quickly became a reality.

Ryan started lifting weights regularly from the age of 13 but as fate would have it, when tragedy struck close to home, a peer from his gym won the Canadian Powerlifting Championships and the pieces fell into place. Ryan asked his National Champion peer, Alex Drolc, for help in building his strength up to such a caliber. Because of his love for weightlifting and hunger for superhuman strength, Ryan landed himself a spot in the Canadian Championships so quickly that no one knew who he was. He drew comic like muscles on his black singlet with chalk and when people started talking about the outcome and referred to Ryan as "the 6-pack guy, the one with the 6-pack drawn on his singlet," the name stuck. [1]

6 Pack Lapadat's audition in Episode 1006 consisted of power lifting 15 people (including all four judges and Nick Cannon on a bleacher behind him to effectively lift 3000 pounds on his back. Howard Stern, Heidi Klum, Mel B, and Howie Mandel all voted "Yes," sending 6 Pack to the Judge Cuts round. 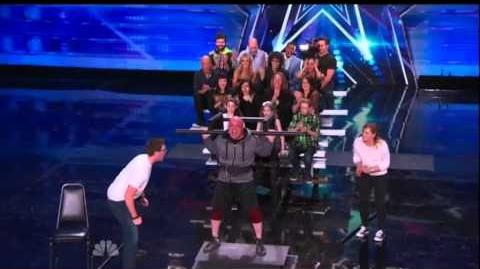 6 Pack Lapadat did not perform in the Judge Cuts round, meaning he either withdrew or was cut by the judges before this stage of the competition.