A Tall Order was a ballroom dancer duo act from Season 8 of America's Got Talent. It was eliminated in the audition round.

Suzie Hardt and Todd Marsden of A Tall Order received a standing ovation for their performance with the St. Louis Symphony and composer Victor Vanacore for his production "Swing."

Their TV and film credits include “Swing” starring Jaquline Bisset, the PBS swing documentary, “Big Band Magic”, and composer Faranak's piano video. They have choreographed and performed a number of modern, tango, and ballroom pieces for the stage including waltz, foxtrot, mambo, salsa, swing, rumba, cha cha, quickstep, and Argentine Tango and are known throughout the Bay Area for their entertaining dance style and innovative choreography.

A Tall Order's audition in Episode 804 consisted of dancing the Tango while wearing chicken suits. Howard Stern, Heidi Klum, Mel B, and Howie Mandel all buzzed the act. All four judges voted "No", eliminating the duo from the competition. 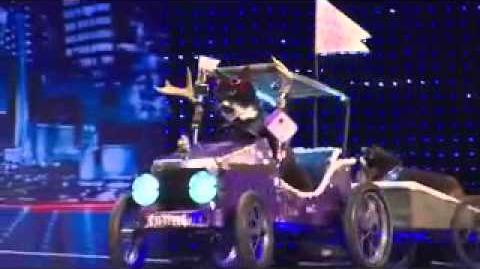