Semifinalist
Aaron Crow was a danger act from Season 13 of America's Got Talent. He was eliminated in the Semifinals.

Aaron Crow is a Belgian mentalist, magician and danger-act, perhaps best known for his spectacular appearances on "Le Plus Grand Cabaret Du Monde" and Britain's Got Talent. Clips of his performances have amassed well over 126 million hits on YouTube. The Daily Mirror reported, "A BGT insider said: 'Aaron's performance went down a storm with the judges and viewers'."

Aaron Crow is an international TV sensation and was featured in The Sydney Opera House and on Broadway New York with two of his signature acts in the biggest touring magic show in the world "The Illusionists" , alongside fellow magicians as Dan Sperry, Kevin James and Jeff Hobson.

Crow is a highly respected and sought after performer in the entertainment world, both for his strong (silent) stage persona and his unique creations, unseen in the history of magic and thereout. Often named "The Silent Mentalist" or "The warrior" or "Mystical", Crow created a unique brand that stands out when it comes to bringing audiences to the edge of their seats. [1]

Aaron Crow's audition in Episode 1302 consisted of inviting two audience members and Howie Mandel to the stage, giving the audience members a wooden board and a paper bag full of sand to hold, and giving Howie a pineapple to hold on his head. He then poured hot candle wax over his eyes and covered them with bandages, tape, and aluminum foil. He sliced the bag with a small knife, broke the board in half with nunchucks, and chopped the pineapple with a sword. Howie, Mel B, Heidi Klum, and Simon Cowell all voted "Yes", sending Aaron to the Judge Cuts. 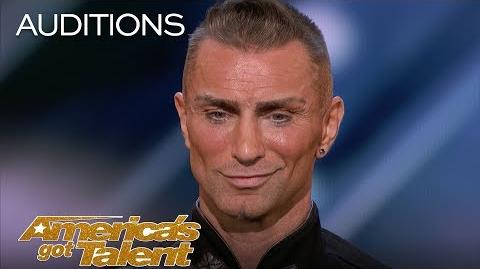 Aaron Crow's Judge Cuts performance in Episode 1307 consisted of shooting an arrow at a target. On the way to the target, The arrow hit an apple on a platform on Heidi Klum’s head, while guest judge Ken Jeong was holding the platform. Howie Mandel, Mel B, and Simon Cowell gave him standing ovations. His performance was strong enough for the judges to send him to the Quarterfinals along with Duo Transcend. 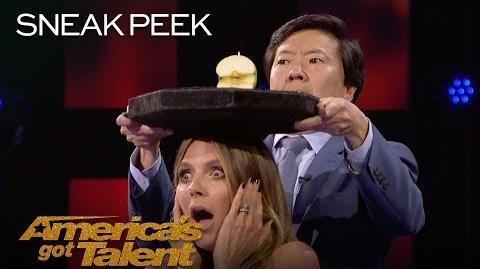 Aaron Crow's Week 3 Quarterfinals performance in Episode 1315 consisted of playing a "game of chance". He first concealed a dagger underneath one of four rectangular boxes as Howie Mandel struck a pillar with a sledgehammer. He then smashed two of the remaining smaller boxes judged by when Howie struck the pillar before inviting Simon Cowell on stage to crush one of the boxes, revealing the other with the dagger. Mel B buzzed the act. Aaron finished in sixth, seventh or eighth place in America's Vote. In the Dunkin' Save, he received fewer online votes than Daniel Emmet. In the Judges' Choice, Simon Cowell did not vote for him (his reason for doing so was to not nearly die again), but Mel B, Heidi Klum, and Howie Mandel did, advancing to the Semifinals in Episode 1316 instead of The Future Kingz. 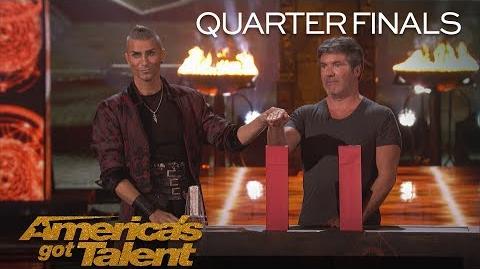 Aaron Crow's Week 2 Semifinals performance in Episode 1319 consisted of a "game of chance" involving Howie Mandel concealed in one of four crates on stage. Heidi and Mel each chose one of four corresponding tiles, after which Crow chopped a rope suspended above each crate, shattering it. He then gave Howie's glasses to Simon, placing them on one of the two remaining tiles. Crow chopped the rope on the one Simon didn't choose, revealing Howie under the remaining box and bringing him back on stage. Aaron did not receive enough votes to advance to the Finals in Episode 1320, eliminating him from the competition along with Da RepubliK instead of Vicki Barbolak. 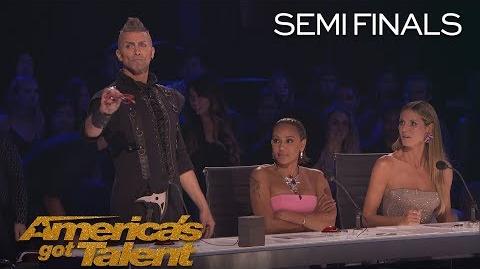