America's Got Talent Wiki
Register
Don't have an account?
Sign In
Advertisement
in: Acts, Dance Groups, Quarterfinalists,
and 12 more

Academy of Villains is a competitive dance group from San Francisco, California. Established in 2009, Academy of Villains is directed and managed by Pharside and Krystal Meraz. The group has placed in every competition they have ever entered and were crowned USA Champions at Hip Hop International (HHI) 2012. They attribute their success to hard work, determination and drive. 1

Academy of Villains submitted its audition onto YouTube. Although the audition was neither viewable nor votable on the AGT YouTube Channel, the group's audition was strong enough for the judges to send it to the Quarterfinals along with eleven other YouTube Acts.

Academy of Villains's Quarterfinals performance in Episode 722 consisted of dancing as a group to "Bohemian Rhapsody" and "Whuteva." The group received enough votes to be sent to the Semifinals in Episode 723 instead of Cast In Bronze and Reverse Order.

The Academy of Villains' Semifinals performance in Episode 726 consisted of dancing as a group to "Cinema" as well as One Republic's "Secrets' with a mime theme. The group did not receive enough votes to be sent to the Finals, eliminating it from the competition in Episode 727 along with Andrew De Leon, instead of William Close.

Academy of Villains returned to Season 13. Their audition in Episode 1305 consisted of performing a shadow dance routine that involved a man running from a cemetery (a metaphor for trying to escape death), but running into the Grim Reaper, who then turned into an angel. The full verdict was not televised, but although Howie Mandel voted "No," Mel B, Heidi Klum, and Simon Cowell voted "Yes," sending the group to the Judge Cuts. 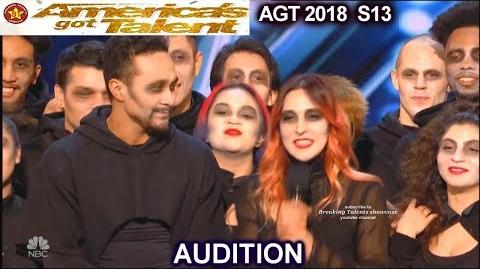 Academy of Villains' Judge Cuts performance in Episode 1310 consisted of performing a hip-hop dance routine using picture frames and straps. Simon Cowell buzzed the act, but Mel B gave them a standing ovation. Their performance was not strong enough to advance to the Quarterfinals, eliminating them from the competition along with Diabolowalker and Troy James.

After being eliminated in the semifinals, In 2015, the group appeared on the 2nd season of TruTV's Fake Off. where they made it all the way to the finals and were crowned the winner of Season 2. Ironically enough, their predecessor from the first season, Lightwire Theater, were also the winners of their season. Both acts competed in the same season and got eliminated the same round.