America's Got Talent Wiki
Register
Don't have an account?
Sign In
Advertisement
in: Acts, Accepted Acts, Acrobats,
and 14 more

Acrodunk is from Houston, Texas. Jerry L. Burrell created Acrodunk in 1994 with a dream to combine high flying, gravity defying trampoline acrobatics with the raw energy and finesse of basketball slam-dunking. Acrodunk's mission is to inspire young people worldwide to identify with their soaring heights and pursue their highest dreams.

Team AcroDunk's audition in Episode 101 consisted of dunking basketballs into a basketball hoop through creative variations of hopping onto a trampoline. Piers Morgan buzzed the act. Brandy Norwood, David Hasselhoff, and possibly Piers Morgan voted "Yes," sending the act to the Semifinals. 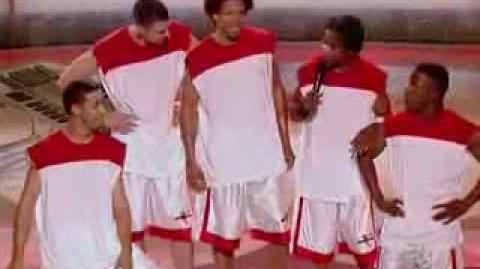 Team AcroDunk's Week 3 Semifinals performance in Episode 108 consisted of acrobatic dunking feats such as dunking two balls at once, climbing onto the backboard, and dunking through a poster covering the hoop from sight. Piers Morgan, Brandy Norwood, and David Hasselhoff all gave Team AcroDunk "✓" votes. The team did not receive enough votes to finish in at least second place in America's Vote, eliminating it from the competition in Episode 109 instead of Bianca Ryan and Nathan Burton.

Team Acrodunk returned in Season 4 as simply Acrodunk. Its second audition in Episode 406 consisted of acrobatic dunking feats involving flips and passes in the air off a trampoline, all to The Black Eyed Peas' "Boom Boom Pow." Piers Morgan, Sharon Osbourne, and David Hasselhoff all voted "Yes", sending the group to the Vegas Round. 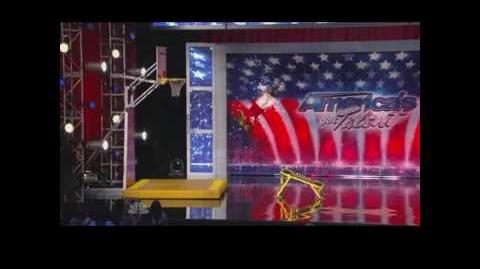 Acrodunk appeared without performing in the Vegas Round. The group's audition was strong enough for the judges to send it to the Quarterfinals in Episode 411 along with The Platt Brothers.

Acrodunk's Week 1 Quarterfinals performance in Episode 413 consisted of hopping on trampolines to shoot basketballs into hoops, all to Flo Rida's "Jump". New tricks involved climbing a wall adjacent to the hoop and then dunking and hopping on a trampoline onto a second trampoline and then tossing the ball into the hoop. Acrodunk received enough votes to be sent to the Semifinals in Episode 414 instead of Breaksk8. 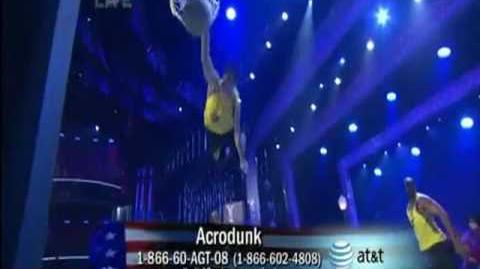 Acrodunk's Week 1 Semifinals performance in Episode 421 consisted of basketball dunks, flips, and backflips. At one point, one of the members dunked a ball through a flaming ring into a flaming loop. Piers Morgan, Sharon Osbourne, and David Hasselhoff all gave the group standing ovations. Acrodunk did not receive enough votes to be sent to the Finals, eliminating the group from the competition in Episode 422 instead of Kevin Skinner.

Jerry L. Burrell returned to compete by himself on Season 13, nine years later. He was briefly montaged and in a negative fashion, with Simon adding "I think we saved a life" after the performance, meaning he was eliminated in the audition round.

Members of the team returned for Season 9 as part of the act called SLAM!