America's Got Talent Wiki
Register
Don't have an account?
Sign In
Advertisement
in: Acts, Rejected Acts, Magicians,
and 3 more

None
Adam Flowers was a magician act from Season 11 of America's Got Talent. He was eliminated in the audition round.

As the bright lights of Las Vegas begin to glow, Adam Flowers performs nightly, not on a stage, but taking a cue from Shakespeare, the world is his stage. The Freemont Street Experience in the heart of downtown Las Vegas is where Adam enraptures thousands. His eye-catching street magic along with witty improvisational comedy often involves his audience.

Since moving to Las Vegas in 2004 Adam has gained the reputation as being a premier magician working private and corporate events in hotels & casinos such as Wynn, Hard Rock, Luxor, Mirage, and Bellagio. Television appearances include MTV’s hit show "The Osborne’s" and Univision’s “Ver Para Creer", among others. [1]

Adam Flowers' audition in Episode 1105 consisted of creating the illusion of a lollipop levitating around his body. Howie Mandel, Mel B, and Simon Cowell voted "No", eliminating Adam from the competition. 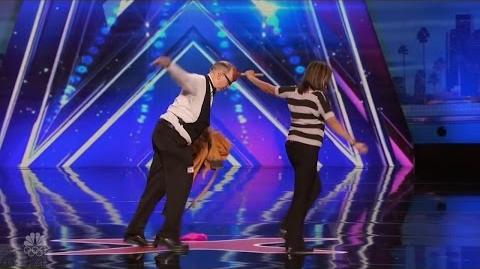