Adrian Romoff was a pianist act from Season 9 of America's Got Talent. He was eliminated in the Quarterfinals.

Adrian Romoff is from Atlanta, Georgia, USA. Adrian first showed interest in strings at 2 1/2. Adrian began studying piano in earnest at 4 1/2, and his mother Olga Romoff has been his primary teacher. Previous attempts at working with an outside piano teacher were not as successful, said Ms. Romoff, noting Adrian was working through two and three books a week. At age 7, Adrian appeared on national television, charming Ellen DeGeneres in an interview.

Adrian has performed at Carnegie Hall three times. In 2012, he took third place in the American Protege International Music Talent competition there. In the fall, his mother and he will fly up from their home in Peachtree City, Ga., to participate in The Julliard School’s weekly pre-college Saturday program.

A big fan of Lang Lang and Vladimir Horowitz as well as Albert Einstein, Adrian is passionate about science. Although he practices up to six hours a day, Adrian still attends school, where he has skipped five grades. Although 9 years old, he is in eighth grade.

Adrian Romoff's audition in Episode 901 consisted of playing "Flight of the Bumblebee" on the keyboard. When Howard Stern expressed his confusion over how much of the piece was track and how much was Adrian, Adrian offered to play another piece. After the performance of "Chopin’s Grande Valse brilliante in E-flat Major, Op. 18," Howard, Heidi Klum, Mel B, and Howie Mandel all voted "Yes," sending Adrian to Judgment Week. 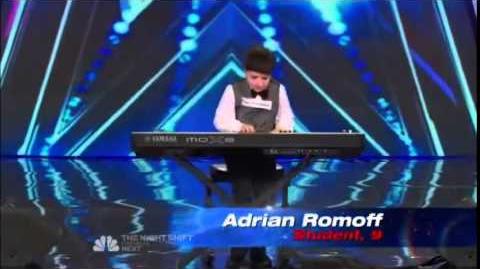 Adrian Romoff was sorted into the "Kid Variety" category in Judgment Week. His performance in Episode 908 consisted of playing George Gershwin's "Rhapsody in Blue" on the piano. Adrian's performance was strong enough for the judges to send him to the Quarterfinals in the same episode. 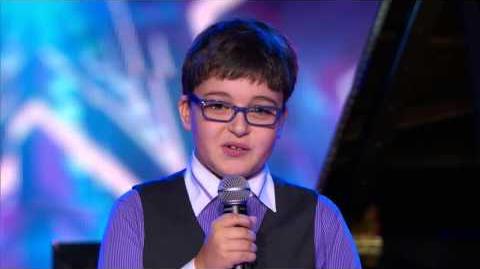 Adrian Romoff's Week 3 Quarterfinals performance in Episode 913 consisted of playing Euphemia Allen's "Chopsticks" and Mozart's "Eine Kleine Nachtmusik" on the piano. Heidi Klum gave him a standing ovation. Adrian did not receive enough votes to be sent to the Semifinals, eliminating him from the competition in Episode 914. 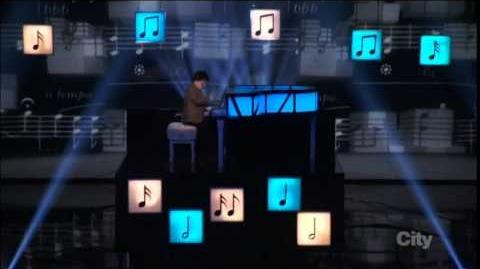 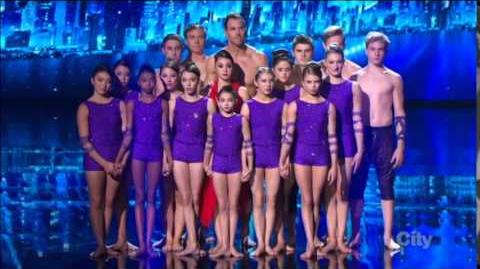 In 2014, Adrian was accepted into Juilliard School of Music in New York as a classical pianist complete with scholarship. [2]

In 2016, Adrian is now a senior in high school and taking college courses. He has premiered on Lifetime's Child Genius and won, getting an $100,000 college fund.

Retrieved from "https://agt.fandom.com/wiki/Adrian_Romoff?oldid=77643"
Community content is available under CC-BY-SA unless otherwise noted.