African High Flyers was an acrobat group act from Season 4 of America's Got Talent. The group was eliminated in the Quarterfinals.

Based in Orlando, Florida, the African High Flyers are a group of seven men who were all raised in Kenya, Africa. They started performing acrobatics when they were young boys as a way to support their families. As they grew, they began performing at local talent shows and finally received a job offer in America and have been performing at NBA basketball games, musicals, circuses and theaters ever since. The most memorable performance for the African natives was in North Dakota in front of 4,000 fans. The African High Flyers are Ali Fondo, Kifala Kalama, Garama Katana, Said Kitsao, Karisa Kombe, Baraka Ngala, and Philip Shale. [1]

African High Flyers' audition in Episode 407 consisted of balancing on each other to create a hoop shape that other performers leaped through and performing a handstand on a human pyramid. Sharon Osbourne and David Hasselhoff both voted "Yes," sending the group to the Vegas Round.

African High Flyers appeared without performing in the Vegas Round. The group's audition was strong enough for the judges to send it to the Quarterfinals in Episode 412.

African High Flyers' Quarterfinals performance in Episode 419 consisted of performing acrobatic feats such as hand balancing and especially low limbo tricks, all to Reel 2 Real's "I Like to Move It." Piers Morgan buzzed the act. African High Flyers did not receive enough votes to be sent to the Semifinals, eliminating the group from the competition in Episode 420 along with Coney Island Chris and Pam Martin's Top Dogs. 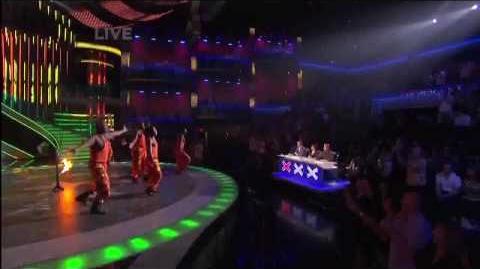 Retrieved from "https://agt.fandom.com/wiki/African_High_Flyers?oldid=89927"
Community content is available under CC-BY-SA unless otherwise noted.