America's Got Talent Wiki
Register
Don't have an account?
Sign In
Advertisement
in: Acts, Rejected Acts, Comedians,
and 13 more

Alex Hooper was sculpted in Baltimore, MD. As a troubled weirdo, he tried on many hats before realizing only comedy could tame his hair. On stage he is known for his clever writing, fearless style, rampant energy, and sickeningly positive attitude. He has appeared on Comedy Central (Roast Battle 2, Corporate), Fox's New Girl, TVLand, Nickelodeon, and most importantly, The Bad Girls Club. His 2018 Album "Hugs. Drugs. Pugs." hit #1 on Amazon and #3 on ITunes Best Selling Comedy Records. Also in 2018 his Pug Yoga Calendar was featured on The Ellen Show. Funny Or Die named him one of the 15 Funniest Comics to Follow. Good Deed Seats included him in their list of The 40 Best Up & Coming Comedians. He created CRAVE, a unique comedy and dance party experience. Named one of LA Weekly's Best of 2013, CRAVE has also been recognized by The LA Times and Thrillist. [1]

Alex Hooper's audition in Episode 1302 consisted of performing a stand-up comedy routine in which he brutally roasted Tyra Banks and the four judges. Howie Mandel, Mel B, Heidi Klum, and Simon Cowell (Mel buzzed for him) all buzzed the act. Although Simon voted "Yes", Howie, Mel B, and Heidi voted "No", eliminating Alex from the competition. 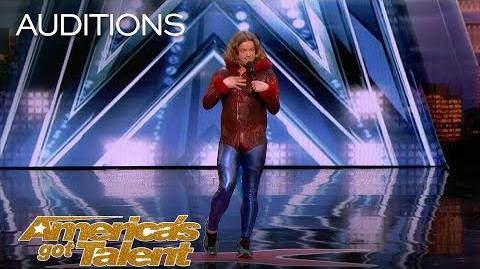 Alex returned in Season 15. His audition in Episode 1507 consisted of him "apologizing" for his brutal roasts... by roasting the judges once again, including the absent Heidi Klum. Although Heidi was not present, Howie Mandel, Sofia Vergara, and Simon Cowell all voted "yes", sending Alex to the Judge Cuts.

Alex Hooper Nasty Comedian Who Got Kicked Off After INSULTING The Judges is BACK For More Insults!
Audition

Alex Hooper automatically advanced to the Quarterfinals without performing in Episode 1508.

Alex Hooper's Quarterfinals performance in Episode 1515 consisted of reading a comedic story titled "As The World Burns"... while roasting the judges and Terry at the same time. Sofia Vergara buzzed the act after the performance. Howie Mandel gave him a standing ovation. Alex did not receive enough votes to advance to the Semifinals in Episode 1516, eliminating him from the competition along with Lightwave Theatre Company instead of Broken Roots.