Judge Cuts
Andrew Johnston was a singer act from Season 13 of America's Got Talent. He was eliminated in the Judge Cuts.

Andrew Johnston is a singer from Bourbonnais, Illinois.  He has been singing in the CTA tunnels and streets of Chicago for a little more than two years, and he went viral in 2017 with a performance of India Arie's "Ready For Love." That performance, and those like it, helped him gain an opportunity to become a guest on "Steve," a daytime talk show hosted by Steve Harvey in January 2018.  Andrew auditioned for American Idol in 2018 but did not advance past the preliminary auditions [1].

Andrew Johnston's Judge Cuts performance in Episode 1307 consisted of singing John Lennon's "Imagine". Howie Mandel, Mel B and Heidi Klum gave him standing ovations. Andrew's performance was not strong enough for the judges to send him to the Quarterfinals, eliminating him from the competition along with Celina and Filiberto, Kevin Blake and Harold & Regan. 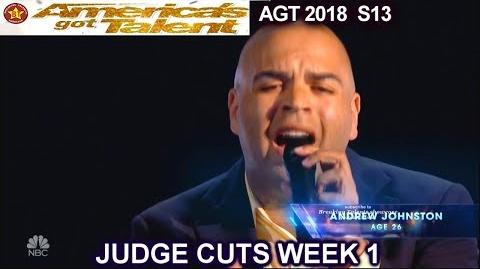