Withdrew
Annaliese Nock was a daredevil act from Season 13 of America's Got Talent. She withdrew from the competition prior to the Judge Cuts.

Annaliese Nock is the daughter of Season 12 contestant Bello Nock. She is an 8th generation circus performer, female daredevil and Sarasota native who attained a Guinness World Records Title on the Opening Night of the 2016 Circus Sarasota. She is the only female in the world to do a front somersault in the Wheel of Death. At the Opening night of Circus Sarasota’s winter Production, Red, White & BELLO! Annaliese completed the most somersaults in one minute in the Wheel of Death. An adjudicator from Guinness World Records attended the performance to verify Annaliese met the record breaking criteria. [1]

Annaliese Nock's audition in Episode 1304 consisted of performing an act called "The Exploding Coffin." In it, she locked herself in a coffin filled with 6 sticks of dynamite, while her father watched from off to the side. She needed to exhale at the right moment, or else her lungs could be at risk of imploding. She survived the attempt, completing the stunt. Howie Mandel, Mel B, Heidi Klum, and Simon Cowell all voted "Yes", sending her to the Judge Cuts. 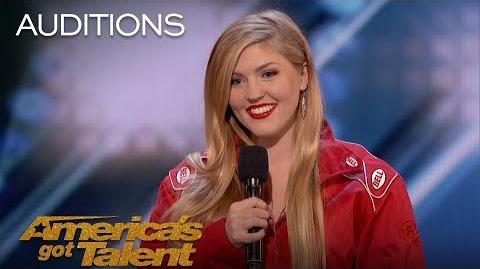 According to an Instagram post, Annaliese Nock withdrew from the competition for personal reasons. As such, she did not appear in the Judge Cuts.

Annaliese, along with her father Bello, competed on Britain's Got Talent: The Champions. They won the fan vote in week 1 of the Preliminaries (beating out acts such as The Sacred Riana, Ashleigh & Sully, and Paul Potts), and finished in the Top 10.

Annaliese auditioned for America's Got Talent once again in Season 15, this time with her father, and was eliminated in the Quarterfinals.

Annaliese competed on the second season of TBS' Go Big Show in 2022 in which she advanced to the semi-finals. She received a higher score than Kevin Taylor and freerunner Jose Angeles in her three-way matchup but lost a spot in the finale in the judges' choice to bull leaper Manu Lataste, eliminating her from the competition. She was later chosen by the judges to be brought back as the wildcard in the finale in which she finished 3rd place, beating out BMX rider James Carter but losing to runner-up Professor Splash and the winner bull jumper Manu Lataste.