Judge Cuts
Avonlea Martin was a singer/songwriter/pianist act from Season 11 of America's Got Talent. She was eliminated in the Judge Cuts.

Avonlea has years of performing and creative experience, exemplary talent, and a voice, style and message that are all her own. Around the age of 10, she reluctantly let her parents put an upright piano in her bedroom, and that was the start of her songwriting journey. Primarily self-taught on the piano and guitar, Avonlea realized she could create her own chord progressions and write her own lyrics. She fell in love with the process.

Over the past 5 years, Avonlea has written 60+ songs and has become proficient on LogicProX and iMovie, which allows her to fully write, film, play, sing and produce her own songs and videos. Avonlea has made many wonderful connections over the years, which has allowed her to work with some of the top writers, producers and musicians in the business to hone her talent.

Avonlea was awarded first prize in the 2014 International Songwriter’s Competition teen division with her song “Your One”, earning her a full scholarship to the prestigious Berklee College of Music’s 5 Week Performance Program in Boston. While attending the program, she was chosen to perform in the Singer-Songwriter Showcase at the Berklee Performance Center. Her song “Surprise Me” is a finalist in the 2015 ISC Teen Division.

Avonlea has been a member of West Coast Songwriters for 2 years and has been a featured performer at their benefit concert in May 2015 and at their conference opening event in September 2015. In December, Avonlea was invited to perform in the Narada Michael Walden Foundation holiday show with Neal Schon (Journey) and Martha Reeves.

Avonlea lovingly devotes her time to supporting local non-profits by performing at their fundraising concerts. She sings annually for The Pediatric Dental Initiative, Crossing the Jordan and Social Advocates for Youth in Sonoma County. Avonlea is on the board of Ukes4Kids.org and teaches the children in the program weekly. Avonlea hopes to use her music and connection with her already burgeoning fan base to bring about change in the world. [1]

Avonlea Martin's audition was never televised. She played keyboard and sang Cyndi Lauper's "Girl's Just Want to Have Fun". She then said she was a songwriter and Simon asked if she wanted to play an original. She played her original song "7am". She got 4 yes votes from the judges sending Avonlea to the Judge Cuts.

Avonlea Martin's Judge Cuts performance in Episode 1110 consisted of singing an original song called "Surprise Me" while playing the piano. Avonlea's performance was not strong enough for the judges to send her to the Quarterfinals, eliminating her from the competition along with Ary Hill and Campbell Walker Fields. 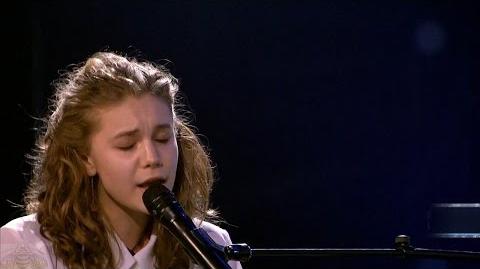