America's Got Talent Wiki
Register
Don't have an account?
Sign In
Advertisement
in: Acts, Accepted Acts, Female Singers,
and 8 more

Quarterfinalist
BRI was a singer/pianist act from Season 4 of America's Got Talent. She was eliminated in the Quarterfinals.

Sabrina "BRI" Bernstein learned to play piano shortly after learning to walk; then she picked up the French horn and the drums. She was born with a stuttering problem and could not speak. She found an outlet in music, helping her overcome her impediment. She attended the Las Vegas Academy for the Performing Arts, where she loved studying and writing essays and poetry. She writes and performs her own music at local venues. Her family tells her that she is a "band geek by day and rock star by night." [1]

BRI's audition in Episode 405 consisted of singing her rendition of the Jonas Brothers’ "Burnin’ Up" while playing the piano. Piers Morgan, Sharon Osbourne, and David Hasselhoff all voted "Yes", sending BRI to the Vegas Round. 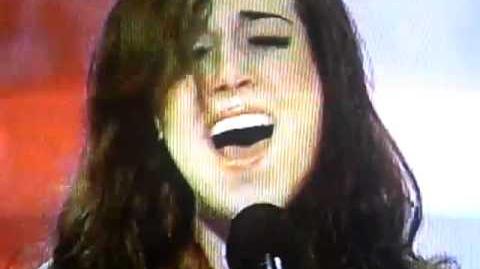 BRI appeared without performing in the Vegas Round. Her audition was strong enough for the judges to send her to the Quarterfinals in Episode 412.

BRI's Quarterfinals performance in Episode 417 consisted of singing Lady Gaga's "Poker Face" while playing the piano. BRI did not receive enough votes to be sent to the Semifinals, eliminating her from the competition in Episode 418 instead of Jeffrey Ou.