America's Got Talent Wiki
Register
Don't have an account?
Sign In
Advertisement
in: Acts, Rejected Acts, Season 1 Acts,
and 4 more

None
Blue Velvet was a vocal trio act from Season 1 of America's Got Talent. It was eliminated in the audition round.

The band formed in 1996, while founder Kevin Cavanaugh was writing and directing a variety dinner theatre show in Kentwood, Michigan called Expect the Unexpected. A last minute addition to the show featured Cavanaugh’s song “Out To Lunch,” staged by him with two female vocalists styled after Doris Day. After the show, the trio decided to launch their own act as Blue Velvet. As of 2014, the group also includes singers Normandie Wilson and Peggy Sue. [1]

Blue Velvet's audition in Episode 101 consisted of singing its name in a high register. Piers Morgan, Brandy Norwood, and David Hasselhoff all buzzed the act. All three judges voted "No," eliminating the act from the competition. 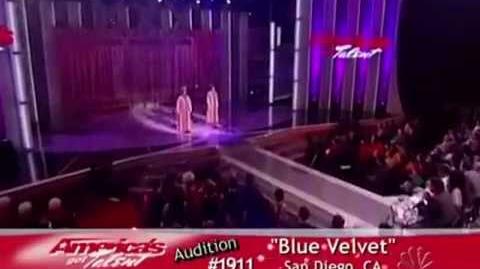