Bob Markworth & Mayana was an archer duo act from Season 9 of America's Got Talent. It was eliminated during Judgment Week.

An Archery Hall of Fame inductee and a past California State archery champion, Bob Markworth has been performing his bow and arrow shooting act for over 55 years in night clubs, hotels, theaters, sport shows and on TV in 58 different countries around the world. [1]

He has had twenty or more assistants, three of which were previous wives, and is currently single. Mayana has been his assistant for over eight years.

Bob Markworth & Mayana's audition in Episode 903 consisted of Bob performing archery feats such as shooting arrows at Mayana so that some of her clothes were ripped off. Howard Stern, Heidi Klum, Mel B, and Howie Mandel all voted "Yes," sending the duo to Judgment Week. 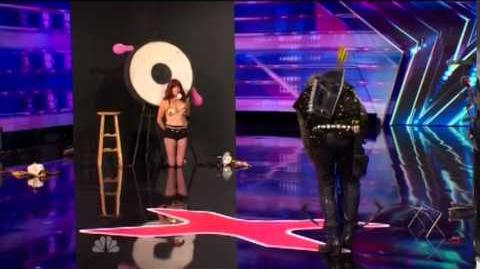 Bob Markworth & Mayana were sorted into the "Variety Acts" category in Judgment Week. The duo's performance in Episode 908 consisted of Bob shooting at two balloons with two arrows at one time and at a playing card. Unfortunately, Bob failed to pierce one of the balloons and failed to split the playing card in half. Bob & Mayana's performance was not strong enough for the judges to send them to the Quarterfinals, eliminating the duo from the competition that same episode. 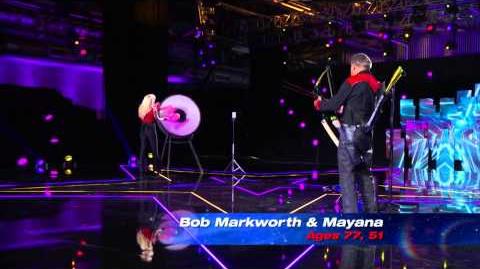