America's Got Talent Wiki
Register
Don't have an account?
Sign In
Advertisement
in: Acts, Novelty Acts, Rejected Acts,
and 6 more

Auditions
Box of Clowns were a novelty act from Season 13 of America's Got Talent. They were eliminated in the audition round.

We are Box of Clowns, a physical theatre ensemble from Portland, Oregon. We are a clown troupe and proudly come from a tradition of popular theatre. Our premier work, "Mom?", was our culmination project at Dell'Arte International School of Physical Theatre, and thus our box was born. Our ensemble methods have grown out of the teachings at Dell’Arte, our own group research, and a collective desire to find delight and humor in unexpected places. We benefit from pushing ourselves past expected limits physically and mentally, ruthless play, and fierce editing. Box of Clowns aims to create visceral, emotional, and provocative experiences for our audiences.

The members are Jeff Desautels, Laura Loy, and Anna Sell. [1]

Box of Clown's audition in Episode 1306 consisted of having a cartoonish face placed on their bottoms and using it to "lip sync" to Whitney Houston's "I Wanna Dance with Somebody". Howie Mandel, Mel B, Heidi Klum, and Simon Cowell all buzzed the act. All four judges likely voted "No", eliminating the trio from the competition. 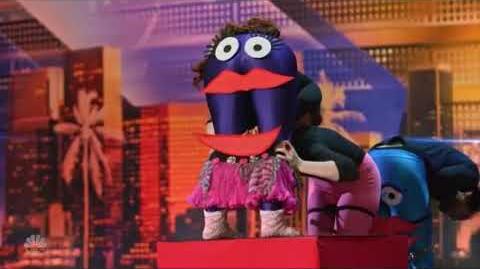