America's Got Talent Wiki
Register
Don't have an account?
Sign In
Advertisement
in: Acts, Accepted Acts, Danger Acts,
and 10 more

Born and raised in Moscow, Idaho, Brad Byers joined a traveling circus as a juggler shortly after graduating from high school. Two years later, he left the circus to focus on television and other international venues. In Brad's constant quest to improve his act, he considered sword swallowing at the age of 21. Brad had never even seen a sword swallower, but borrowed a friend's college anatomy book for research. After careful study, Brad began measuring swords at the local Army Navy store. Upon finding a sword he believed to be the proper length, Brad asked the clerk if he could give it a try. With only the clerk in the Army Navy store in attendance, and never having watched anyone swallow a sword, Brad swallowed his first sword. Brad still remembers the rush from the sensation of that first time he felt the cold steel in his esophagus. In front of a stunned clerk, Brad pulled out that sword, and said "I'll take it!"

Brad’s self-taught repertoire of 20 acts began at age 15 with juggling and chin balancing. He became a yo-yo Grand Master in early adulthood. However, it was his sword swallowing skills that landed him his first national television appearance on "That's Incredible" in the early 1980's. X-rays have been taken that prove the act is not an illusion! Genuine daredevil acts became a trademark for Byers. Power drilling a bit or hammering a nail into his face, inserting a hook through his nose and swinging an anchor, lying on a bed of nails, walking on broken glass, and spinning large items on the tip of his finger have since been added. Brad actually choreographed and trained actor Johnny Depp for his spinning routine in the motion picture Benny and Joon.

He has appeared in 5 episodes of the Fox TV show Guinness World Records Prime Time and was featured on Late Night with David Letterman. Brad is so versatile that he appeared on the Peruvian TV show Que Noche every night for a week and performed a different act each night! Brad's work has taken him to over 20 countries for countless television shows and other venues. Due to his worldwide reputation, the country of Grenada has even pictured him swallowing swords on their official postage stamp.

Brad can swallow a Model T axle, curved sword, wavy bladed sword, bayonette, keyhole saw, and common wire coat hanger, as well as multiple swords at one time. He holds several Guinness World Records, including swallowing 10 swords (one sword at a time up to a record of 10) then, twisting those swords 180 degrees in his throat! To top it all off, he is the only performer in the in the world to finish this feat by taking a bow before removing those ten swords.1

Brad Byers's audition  in Episode 401 consisted of inserting an 18-inch hook through his nasal passage and out his mouth, then hanging an anchor from the same hook in what he called his "impression of a fishing trip gone horribly wrong." He proceeded by drilling through his left nostril. Although Sharon Osbourne voted "No," Piers Morgan and David Hasselhoff both voted "Yes," sending Brad to the Vegas Round. 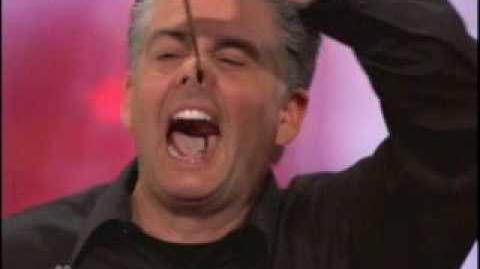 Brad Byers appeared without performing in the Vegas Round. His audition was not strong enough for the judges to send him to the Quarterfinals, eliminating him from the competition in Episode 412.

Brad Byers returned in Season 8. His second audition in Episode 802 consisted of "sword swallowing" nine double-edged 27-inch swords one at a time until all 9 were in his esophagus and then TWISTED all 9 swords simultaneously 180 degrees in his throat before withdrawing them and taking a bow. Although Mel B voted "No," Howard Stern, Heidi Klum, and Howie Mandel voted "Yes," sending Brad to the Vegas Round. 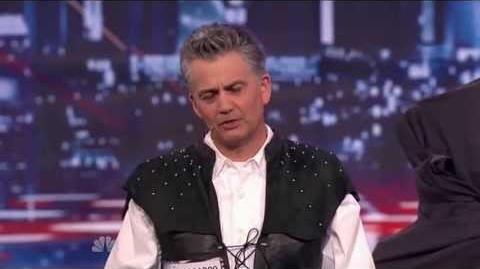 Brad Byers was sorted into the "Danger Acts" category in the Vegas Round. His performance in Episode 808 consisted of pressing an ignited 3,450°-blowtorch onto his tongue and then inserting an 18-inch hook through his nasal passage and out his mouth, then pulling Nick Cannon and Brad's wife riding on a wagon with the hook. His performance was strong enough for the judges to send him to the Quarterfinals along with Alexandr Magala and Sam Johnson in Episode 809. 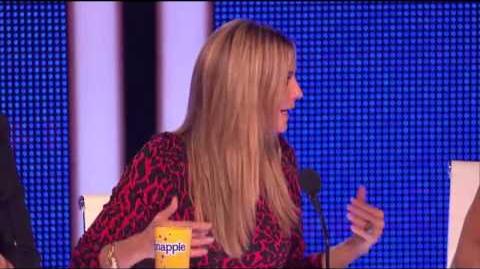 Brad Byers's Week 2 Quarterfinals performance in Episode 812 consisted of sticking his tongue into a running fan and having a thousand-pound ATV run over him as he lay on a bed of nails. Brad did not receive enough votes to be sent to the Semifinals in Episode 813, eliminating him from the competition along with Dave Shirley and Kid the Wiz. 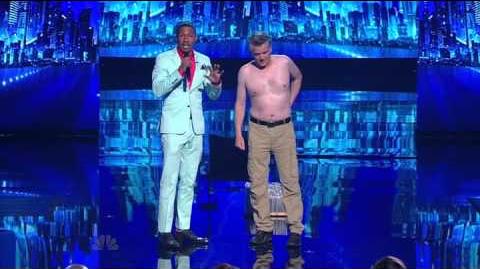 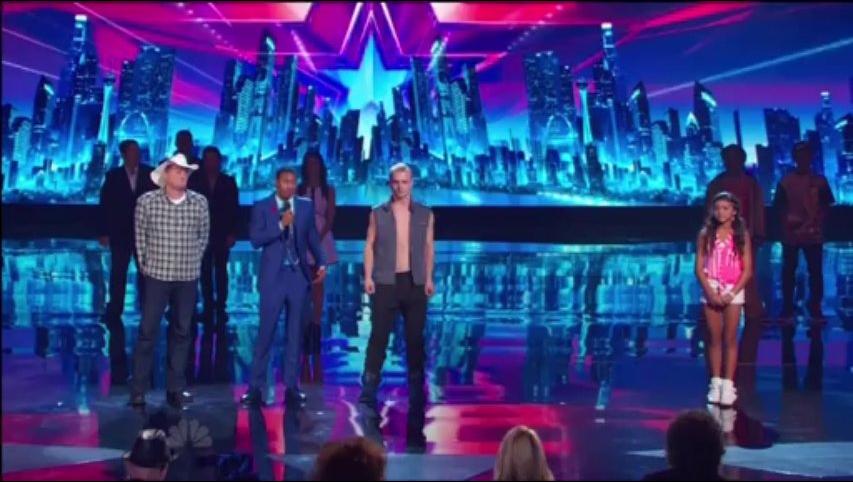