None
Youngblood was an eye milk squirter act from Season 10 of America's Got Talent. He was eliminated in the audition round.

Brandon Youngblood Kee currently lives in Madison, Wisconsin. He first discovered his unique ability to squirt milk from his eye in Middle School after watching someone do it on a "Ripley's Believe It Or Not!" TV show. He saw the disclaimer, "Don't try this at home," and went ahead and tried it and got it on his first try. [1]

The fastest time to ignite five targets by shooting milk from the eye is 34.9 seconds and was achieved by Brandon "Youngblood" Kee on the set of 'Guinness World Records Unleashed' in Los Angeles, California, USA, on June 13, 2013. [2]

Youngblood's audition in Episode 1002 consisted of drinking milk through his nose, holding his eyelid back, squeezing his nose, and finally releasing milk from his eyelids into glass cups. Howard Stern and Heidi Klum buzzed the act. Although Mel B and Howie Mandel both voted "Yes," Howard and Heidi voted "No," eliminating Youngblood from the competition. 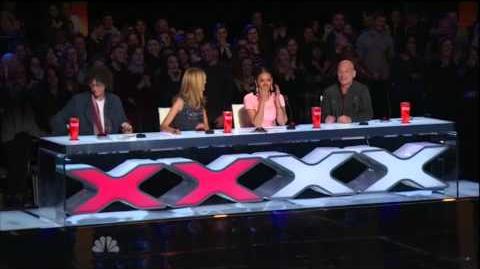