Withdrew
Bruce and Simone were an aerialist duo act from Season 4 of America's Got Talent. They withdrew before the Vegas Round.

Bruce and Simone are from Seattle, Washington. The two are not married, but instead are self-proclaimed "sweethearts."

Simonne is a teacher as well as an avid student of the aerial arts. Her videos can be seen on YouTube and DailyMotion. She is an accomplished fitness trainer.

Bruce is an aerial arts enthusiast and works with partner Simonne to perform for benefits and charities in the Seattle area. Most notably for the Circus of Dream for children with brain cancer, and the Aerial Army of Love and their yearly Aerlift benefit for the children that live in the Guatemalan garbage dumps. 1

Bruce and Simone's audition in Episode 401 consisted of performing an aerial routine on a spinning hoop using beautiful and athletic movements. Piers Morgan buzzed the act. Although David Hasselhoff voted "No," Piers (at the urging of Sharon) and Sharon Osbourne both voted "Yes," sending Bruce and Simone to the Vegas Round.

For a long time it was a mystery whether or not Bruce and Simone were present during the Vegas Round as the duo was never seen. According to the duo they received a contract from NBC and decided not to continue the process.

Bruce and Simone were cast by NBC as one of the eleven Audition All Stars in the Season 4 America's Got Talent finale. The duo's role in Episode 426 consisted of an aerial routine to McFadden & Whitehead's "Ain't No Stoppin' Us Now." 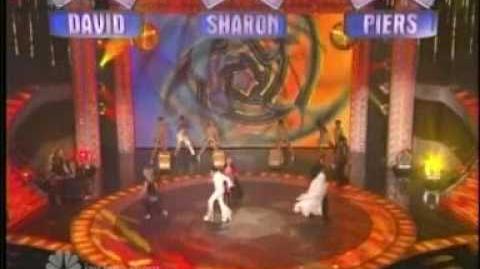