America's Got Talent Wiki
Register
Don't have an account?
Sign In
Advertisement
in: Acts, Impressionists, Rejected Acts,
and 4 more

None
Byrdie Sue was a bird whistler act from Season 10 of America's Got Talent. She was eliminated in the audition round.

Susan Zwit-Frantzen, also known as "Byrdie Sue," whistled along with "Don't Worry, Be Happy" for the show's auditions in Tuesday's episode. The performance drew a mixed reaction from the judges, who called her skills bizarre, and the audience, which clapped along with her. Zwit-Frantzen she has been whistling for more than 40 years and took a job as a pool cleaner in Florida so she could whistle while she worked. Zwit-Frantzen has lived in Warrenville and Naperville. [1]

Sue is a whistler who uses her teeth to whistle while most others use their lips.She learned this technique on her own, while trying to learn the technique her twin brother, Chuck and older brother, Bill could do. Sue has tried unsuccessfully to teach her technique to others.

Sue has performed on local radio and TV, at many Folk Festivals, and Tap Dance performances, entertained at Nursing Homes and Retirement Centers, Grade and High Schools, Puckerama, Whistling Conventions and at Local government functions. She has attended Puckeramas in Tulsa, Oklahoma and Tokyo Japan and loved it. Sue has also participated in the IWC (International Whistlers Convention) in Louisburg, NC. Sue is a member of Orawhistle Global Whistlers' Forum, the world's online whistling community and the Orawhistle Facebook group.

Sue loves to play traditional instruments such as ukulele, banjo, guitar, saxophone, spoons, mountain Dulcimer and will add a little tweet while playing. She is a Chicagoan now residing in SW Florida. [2]

Byrdie Sue's audition in Episode 1005 consisted of bird whistling to "Don't Worry, Be Happy." Although Howard Stern voted "Yes," Heidi Klum, Mel B, and Howie Mandel voted "No," eliminating Byrdie from the competition. 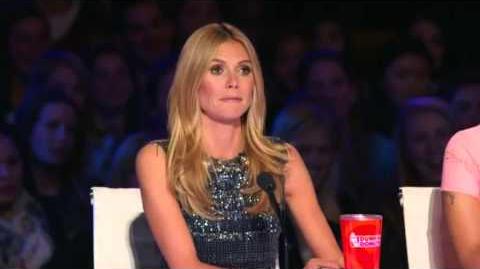