Campbell Walker Fields was a singer/pianist act from Season 11 of America's Got Talent. He was eliminated in the Judge Cuts.

Campbell Walker Fields is from Oklahoma City, Oklahoma. He was adopted at birth by his two dads. Kids would ask him where his mother was, and he was unable to answer.

When he was 10 or 11, he asked his dads about his mom, and they told him she wanted a better life for him. She was raising three other children and could not afford to have another.

Campbell is thankful she gave him up for adoption so he could he have a better life, but he still wants her to be proud of him. Campbell has yet to meet his mother.

Campbell Walker Fields' audition was never televised. He received 4 enthusiastic yesses, he first sang "I Know Where I've been" from Hairspray, then was asked to sing a second number "Not In That Way" by Sam Smith

Campbell Walker Fields' Judge Cuts performance in Episode 1110 consisted of him singing Christina Perri's "A Thousand Years" while playing the piano. Heidi Klum gave him a standing ovation, and said "I don't get emotional and you got me emotional" Campbell was made to get emotional before he sang by Mel B. asking about his mom. Campbell was eliminated from the competition along with Ary Hill and Avonlea Martin. 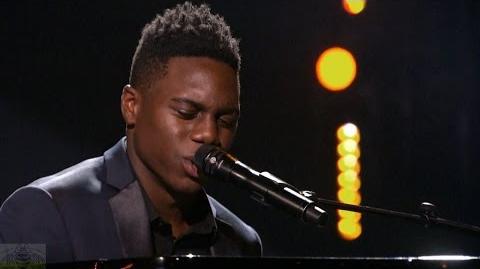 Retrieved from "https://agt.fandom.com/wiki/Campbell_Walker_Fields?oldid=88576"
Community content is available under CC-BY-SA unless otherwise noted.