Withdrew
Caravan of GLAM was a drag dance group act from Season 10 of America's Got Talent. They left the competition before the Judge Cuts.

The next step for the Caravan of GLAM was plotting out our plan of attack. Where was the Caravan of GLAM going to go and how were it going to kick it off in the biggest and best way possible? They decided on the Oregon cities of Portland, Eugene, Salem, Bend, Ashland, and Newport. Cities were set in place and phone calls and emails sent out in the hopes of securing venues and dates. The next part was finding a way to kick off the Caravan of GLAM in style. Personally knowing Latrice Royale from RuPaul’s Drag Race, Justin placed a call directly to Latrice and within 5 minutes she had said “Yes”. Shortly thereafter the Caravan of GLAM debuted and sold out all three shows in Portland, Bend, and Eugene.

Justin and Ecstacy quickly realized that they were onto something unique given the style of show, diversity of performers, and our outstanding entertainment value. A revised plan was put into place and the Caravan of GLAM quickly expanded throughout the Pacific Northwest. Shows have now been booked in Northern California, throughout Idaho, and into Washington State. The Caravan of GLAM will also be debuting on the Casino circuit, which kicks off at The Point Casino in Washington in October 2014. Scouted for Season 10 of "America's Got Talent" in November 2014, the Caravan of GLAM was flown to New York City by the production company behind the show to audition in front of the Celebrity Judges.

The Caravan of GLAM consists of a rotating cast of over 50 performers from Seattle to San Francisco to Hawaii. Our shows consist of all shapes, sizes, and colors. All staff and entertainers are members of the LGBTQ community and identify as Gay, Lesbian, Bi-Sexual, Trans-sexual, or Queer. [1]

Caravan of GLAM's audition in Episode 1003 consisted of three members dancing as a group while the fourth member performed aerialist tricks. Although Howard Stern said no Heidi Klum, Mel B and Howie Mandel voted "Yes." 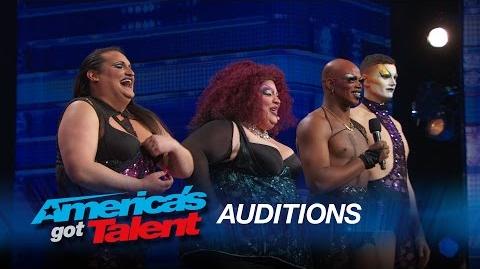 Caravan of GLAM withdrew from the competition before the Judge Cuts round because it conflicted with other projects the group is involved in. [2]