Quarterfinalist
Carol Loo, also known as Carol Lugo, was a dancer act from Season 4 of America's Got Talent. She was eliminated in the Quarterfinals.

Carol Lugo is a mother of three from Jersey City, New Jersey. She is a supermarket cashier. Dancing is her "heart and soul"; she even wears dancing shoes to work despite only standing all day.

Carol Lugo's audition in Episode 403 consisted of dancing to The Four Tops' "I Can't Help Myself." Piers Morgan, Sharon Osbourne, and David Hasselhoff all voted "Yes", sending Carol to the Vegas Round. 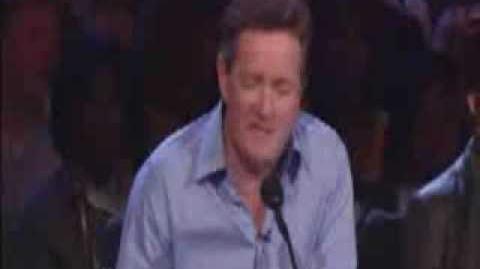 Carol Lugo appeared without performing in the Vegas Round. Her audition was strong enough for the judges to send her to the Quarterfinals in Episode 412.

Carol Loo's Quarterfinals performance in Episode 415 consisted of dancing to Salt-N-Pepa's "Push It." She performed with back-up dancers for her first time. Piers Morgan buzzed the act. Carol did not receive enough votes to be sent to the Semifinals, eliminating her from the competition in Episode 416 along with Eleisha Miller, instead of The Voices of Glory.