11
Cecile & Mighty was a magician/hand balancer duo act from Season 11 of America's Got Talent. They were eliminated in the Judge Cuts.

Cecile has been singing since the age of 6. Mighty has been performing since the age of 23. Together, they combined a one-of-it's kind performance with extreme talents and dedication to quality of performance. Cecile and Mighty are a husband and wife team of the 21st century. They have performed in Casinos in Nevada, California and the Eastern Asia (Thailand, Philippines, Singapore, Cambodia, Korea, Malaysia and Japan) and some parts of the Middle East and Europe. Their variety show features them as Lead Singers, Magicians, Illusionists, and Acrobatic performers along with their Performing Dog. [1]

Cecile & Mighty's audition was never televised, but is featured in a video posted to their YouTube channel, consisting of Cecile singing Jennifer Hudson's "One Night Only" while Mighty swallowed a really long screwdriver and leaned down, then made cards and sets of cards appear in his hand, pulled cards out of thin air from a distance, and finally coughed a long row of cards up. The verdict wasn't shown, but although Mel B voted "No," Howie Mandel, Heidi Klum, and Simon Cowell all voted "Yes," sending the duo to the Judge Cuts round.

Cecile & Mighty's Judge Cuts performance in Episode 1108 consisted of Cecile singing Bonnie Tyler's "Holding Out for a Hero" while Mighty performed magic tricks and hand balanced on two sets of blocks. Simon Cowell buzzed the act. Cecile & Mighty's performance was not strong enough for the judges to send them to the Quarterfinals, eliminating the duo from the competition along with OneVoice. 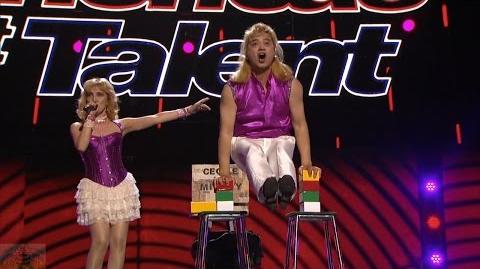 The duo seemed to incorporate every form of talent into their act; Magic, singing, dancing, hand balancing/acrobatics, and comedy (as well as most being variety).