America's Got Talent Wiki
Register
Don't have an account?
Sign In
Advertisement
in: Acts, Accepted Acts, Dance Duos,
and 4 more

Judge Cuts
Celina and Filiberto were a dance duo act from Season 13 of America's Got Talent. They were eliminated in the Judge Cuts.

Celina and Filiberto are a married couple from Cuba. [1]

Celina and Filiberto's audition in Episode 1302 consisted of dancing together suggestively to Jason Derulo's "Talk Dirty to Me". Mel B buzzed the act, stating she was uncomfortable with their performance. Although Mel voted "No," Howie Mandel, Heidi Klum, and Simon Cowell voted "Yes," sending them to the Judge Cuts. 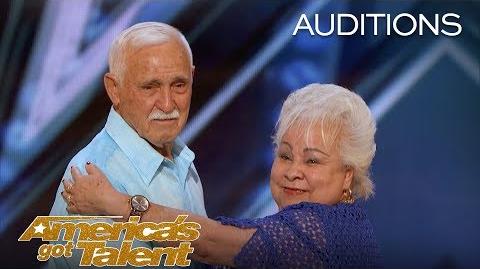 Celina and Filiberto’s Judge Cuts performance in Episode 1307 consisted of changing into "rappers" then performing various dance moves together. Howie Mandel, Heidi Klum, and Simon Cowell gave them standing ovations. Celina and Feliberto's performance was not strong enough to advance to the Quarterfinals, eliminating them from the competition along with Andrew Johnston, Kevin Blake, and Harold & Regan