The Center Stage dance studio in Orem, Utah. once again is taking a role on a center stage. The CS Junior Formation ballroom team is made up of 14 dancers who train under the tutelage of Kim DelGrosso, whose daughter Ashly made headlines on "Dancing With the Stars." The group won the national competition held at Brigham Young University in March 2014. Most of the team members are trained in ballet and have competed in ballroom events. DelGrosso's daughter Afton is the team's director and choreographer. [1]

Center Stage Dance Troupe's audition in Episode 902 consisted of dancing as a group to Bruno Mars' "Runaway Baby". Despite the episode showing Howard Stern and Howie Mandel giving positive comments to the group, they, as well as Heidi Klum, apparently all ended up voting "No", while Mel B was their only "Yes" vote. This verdict eliminated Center Stage Dance Troupe from the competition.

The act returned in Season 10 as simply "Center Stage." Center Stage's audition was never televised, but Howard Stern, Heidi Klum, Mel B, and Howie Mandel all voted "Yes", sending the group to the Judge Cuts.

Center Stage's Judge Cuts performance in Episode 1009 consisted of dancing as a group to Fergie's "A Little Party Never Killed Nobody." The group's performance was not strong enough for the judges to send them to the Quarterfinals, eliminating the group from the competition along with Facinet Sylla, instead of DM Nation. 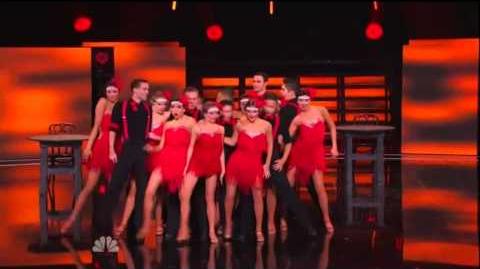