Judge Cuts
Charlie Plaçais was an aerialist act from Season 11 of America's Got Talent. He was eliminated in the Judge Cuts.

Born on August 11, 1986, Charlie Plaçais is from Paris, France. [1] Charlie however lives in Alicante, which is located in Spain.

Charlie Plaçais's audition was never televised. It is unknown whether or not he was buzzed, but at least three judges voted "Yes," sending Charlie to the Judge Cuts.

Charlie Plaçais's Judge Cuts performance in Episode 1109 consisted of performing aerial tricks on the Aerial Straps above a bathtub. Charlie's performance was not strong enough for the judges to send him to the Quarterfinals, eliminating him from the competition. 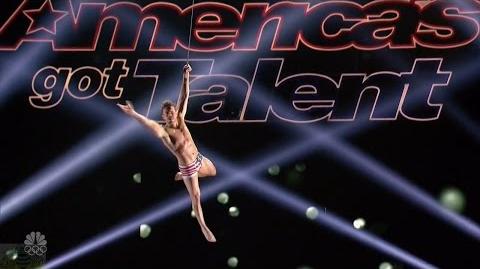 Three years later in 2019 he auditioned for the first episode of Season 5 of Got Talent Espana wherein he once again performed acrobatics upon a bathtub, and went on to receive three of four possible yes votes, however he was later cut from the competition during the deliberations or withdrew beforehand.