America's Got Talent Wiki
Register
Don't have an account?
Sign In
Advertisement
in: Acts, Accepted Acts, Season 2 Acts,
and 26 more

Christian Atayde Stoinev was born on December 4, 1991 in the American “Circus City” of Sarasota, Florida. His father, Ivan Stoinev, is a Bulgarian circus acrobat who left his country at age thirteen to perform at Ringling Bros. and Barnum & Bailey Circus with a teeterboard troupe. His mother, Maritza Atayde, a former aerialist, belongs to the Atayde family, owners of Mexico’s oldest, largest, and most celebrated circus, Circo Atayde Hermanos.

Christian made his circus debut at age six, standing on the shoulders of his father in a free-ladder balancing act. His parents taught him all basic circus disciplines, and over time, Christian became a proficient unicyclist and hand balancer. He spent a large part of his childhood at the Big Apple Circus, where his father was Performance Director, and his mother worked in an administrative capacity.

In 2001, Christian joined the Big Apple Circus resident company as an acrobat, in the Circus’s production of Big Top Doo Wop. He also occasionally worked in other circuses, notably with Circo Atayde in the summer of 2003, in an acrobatic break dance act, Los Primos. He premiered his hand-balancing act, for which he was coached by Miguel Morales, in 2004—and he competed the following year in the Festival Première Rampe in Monte Carlo, where he received a Bronze Medal and Prince Rainier’s Special Award. 1

Christian Atayde Stoinev's audition in Episode 203 consisted of a hand-balancing routine, at one point having his chihuahua on his feet as he was balancing. Afterwards, the dog also performed a stunt by running on its two front legs. Piers Morgan, Sharon Osbourne, and David Hasselhoff all voted "Yes," sending Christian to the Vegas Round.

Christian Atayde Stoinev was sorted into the "Variety" category during the Vegas Round. His performance in Episode 205 consisted of a hand-balancing routine. Christian's dog could not be part of the act this time since it got injured a few days earlier. His audition was not strong enough for the judges to send him to the Top 35 shortlist, eliminating him from the competition along with The Great Throwdini.

In 2008, Christian participated in the International Circus Festival-Città di Latina, in Italy—where he was awarded the Bolshoi Circus’s Special Award, presented to him by Leonid Kostiuk. Christian has appeared in many television shows around the world and, among other venues, he has performed for Britney Spears’s Circus tour at Nassau Coliseum on Long Island, N.Y.

In 2010, Christian enrolled in the Illinois State University at Normal, IL, where he was also a member of their Gamma Phi Circus program, to study Broadcasting. Upon graduation, he resumed his career as a hand balancer. 2

Christian Stoinev was a member of Gamma Phi Circus, an aerial group that was briefly shown in an act montage in Season 7.

Christian Atayde Stoinev returned in Season 9 as simply Christian Stoinev. His second audition in Episode 904 consisted of performing hand balancing feats such as balancing the weight of his entire body on his finger inserted into a glass bottle. Howard Stern, Heidi Klum, Mel B, and Howie Mandel all voted "Yes," sending Christian to Judgment Week. 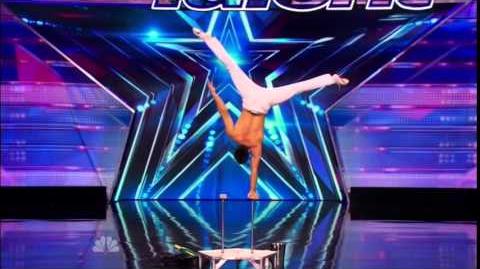 Christian Stoinev was sorted into the "Acrobats" category in Judgment Week. His performance in Episode 908 consisted of hand balancing feats such as balancing on one hand on a stake inserted into a table. In the middle of his routine, his dog Scooby walked out of a small tote bag on the stage. Scooby then walked on Christian's shoulders, ran across Christian's body as he did a somersault, and stood still as Christian lifted Scooby on the soles of his feet as he performed a handstand. Christian's performance was strong enough for the judges to send him to the Quarterfinals along with Flight Crew Jump Rope in the same episode. 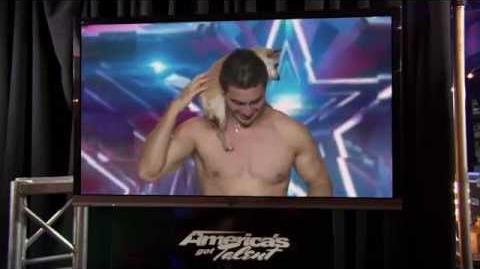 Christian Stoinev's Week 3 Quarterfinals performance in Episode 913 consisted of performing more hand balancing feats on the two stakes. Scooby then joined the stage and stood still on Christian's feet as he performed a handstand on the stakes and Scooby waving his front paws while standing on Christian's back as he spun on one of the metal stakes. Howard Stern, Heidi Klum, Mel B, and Howie Mandel all gave him standing ovations. Christian received enough votes to be sent to the Semifinals in Episode 914 instead of Wendy Liebman. 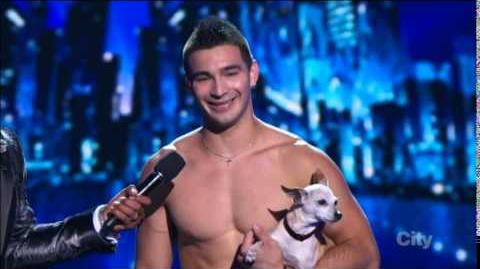 Christian Stoinev's Week 2 Semifinals performance in Episode 919 consisted of performing more hand balancing feats on a rotating platform. Scooby then joined the stage in a dog-sized plane and stood still on Christian's feet as he performed a handstand and walked on his hands on four stakes. Scooby then climbed back into the small plane up a flight of stairs. Christian then opened another box to reveal a second dog named Scooby ii. Christian finished in fifth, sixth, or seventh place in America's Vote. In the Snapple Save, Christian received fewer online votes than Blue Journey. In the Judges' Choice, Howard Stern, Mel B, and Howie Mandel all voted for him, sending Christian to the Top 12 Finals in Episode 920 instead of Smoothini. 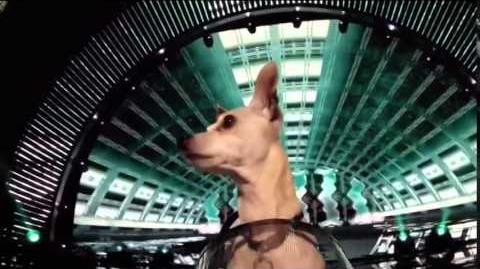 Howard had found fault with Christian Stoinev's previous performance saying he focused too much time on the dogs and should remember he is a balancing act, not a dog act. So, Top 12 Finals performance in Episode 921 Howard was handed Scooby while the opening video showed Scooby II running from Christen as a police office accusing him of "Stealing the Show." Scooby II performed a balancing act on a basket ball and Christian performed hand balancing on three metal stakes, rotating 360 degrees, and removing two of the metal stakes by flicking them away. He ended with a backflip off the platform. During their performance Howard had handed Scooby to Heidi. Howie still supported them but made a bad joke about not wanting to hold Scooby for fear of Scooby poo. Christian did not receive enough votes to be included in the Final 6, eliminating him from the competition in Episode 922 instead of Quintavious Johnson. 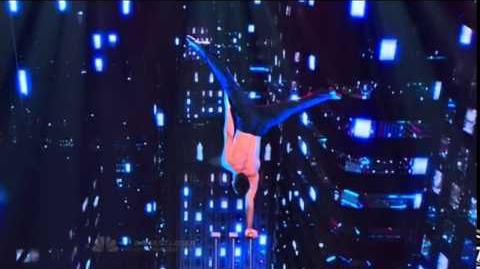 Christian Stoinev's Prelminary performance in Episode TC204 consisted of performing a routine including tricks on balancing canes on a lift and tricks with his dog Percy set to a cover of Billy Idol's "Rebel Yell".  Howie Mandel, Alesha Dixon, Heidi Klum and Simon Cowell all gave him standing ovations. Christian finished in 3rd, 4th or 5th place in the Superfan Vote. In the Judges' Choice, he received only one vote from Heidi Klum, eliminating him from the competition along with Brian King Joseph instead of JJ Pantano.

Christian and his other pet Percy won the thirteenth season of Das Supertalent, a year after Stevie Starr did.

Christian and Scooby competed on Nickelodeon's pet competition show Unleashed in 2020 in which they won their episode against Season 14 contestant Melissa Arleth. One of the judges was Season 12 finalist Preacher Lawson.

In 2021 Christian and his other pet Percy came eighth in the eleventh season of Italia's Got Talent. [1] The same year, the duo auditioned for France's Got Talent. [2]