Withdrew
Cinematic Pop was a Classical Crossover Pop band act from Season 11 of America's Got Talent. It withdrew from the competition before the Judge Cuts.

Cinematic Pop is a crossover musical group that aims to take the sweeping, emotionally-charged instrumental music you might hear in a film-score, and combine it with your favorite rock and pop songs. Cinematic Pop is the creation of Rob Gardner, Drex Davis and McKane Davis and the arrangements are the work of the renowned Gardner. The group chooses the songs carefully with much thought and many of them have personal significance. Most of the songs are iconic in nature and several permanently changed the historical musical landscape. [1]

Cinematic Pop's audition in Episode 1104 consisted of performing their rendition of Tears for Fears' "Everybody Wants to Rule the World". Howie Mandel, Mel B, Heidi Klum, and Simon Cowell all voted "Yes", sending the group to the Judge Cuts. 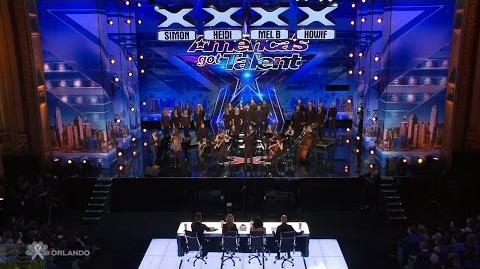 Cinematic Pop did not perform in the Judge Cuts round due to withdrawing because of scheduling conflicts, the size of the group, and logistical concerns. [2]