Cristina Ramos was a singer act from America's Got Talent: The Champions.  She finished the competition in 4th place.

Cristina Ramos' Preliminary performance in Episode TC02 consisted of singing Queen's "Bohemian Rhapsody", in both an operatic and a rock style. Howie Mandel, Mel B, Heidi Klum, and Simon Cowell all gave her standing ovations. It was revealed that the superfans voted Cristina into the Top 3 along with Courtney Hadwin and Darci Lynne. It was then revealed that Cristina received more votes than Courtney and Darci, sending her to the Finals. 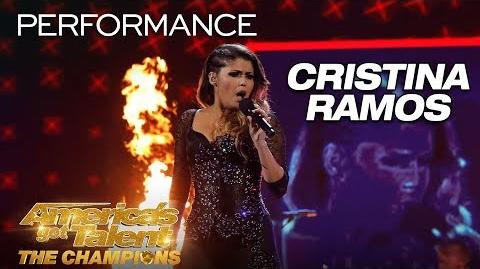 Cristina Ramos' Finals performance in Episode TC06 consisted of singing Blondie's "Call Me", in both an operatic and a rock style. Howie Mandel , Mel B , Heidi Klum and Simon Cowell all gave her standing ovations. 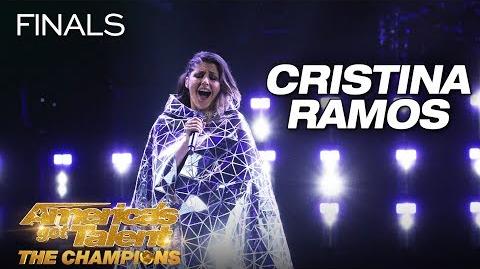 For the finale in Episode TC07, Cristina sang  Queen's "The Show Must Go On" with Brian Justin Crum while Deadly Games did knife tricks. The superfans gave her enough votes to enter the Top 5 instead of Brian Justin Crum and Kechi. Cristina finished the competition in 4th place, ahead of Preacher Lawson but behind Shin Lim, Darci Lynne, and Kseniya Simonova.

In 2019, Cristina competed on the World's Got Talent special held in China. She received judge David Foster's Golden Buzzer, which sent her to the Top 8. She did not make the Top 2.

Cristina also competed on Britain's Got Talent: The Champions. She was eliminated in the Preliminaries.

Retrieved from "https://agt.fandom.com/wiki/Cristina_Ramos?oldid=153771"
Community content is available under CC-BY-SA unless otherwise noted.