America's Got Talent Wiki
Register
Don't have an account?
Sign In
Advertisement
in: Acts, Accepted Acts, Animal Acts,
and 7 more

Judge Cuts
Dana Daniels was a magician/comedian act from Season 10 of America's Got Talent. He was eliminated in the Judge Cuts round.

Dana Daniels, teamed with his Psychic Parrot Luigi (yes, a Psychic Parrot), have been motivating and entertaining at Corporate events around the country for companies such as McDonald’s, Lincoln Financial and Frito-Lay. With Dana as the comedian, and Luigi as the straight bird, the duo never fail to fracture an audience with laughter. Dana sets out to prove his little green friend is truly clairvoyant by performing incredible magic blended with rapid-fire clean comedy and audience participation.

Dana has also opened for such stars as Ray Romano, Amy Grant, Vince Gill, Tony Orlando, Randy Travis, Gary Shandling and Charro. "It's Dana's unique twist" on magic that separates him from other magicians, and separates Luigi from other poultry. [1]

Dana Daniels' Judge Cuts performance in Episode 1010 consisted of having Howie Mandel sign a 20-dollar bill. Dana then created the illusion of the bill disappearing from a paper beak attached to Howie's head and appearing in an egg laid by his bird Luigi. Dana's performance was not strong enough for the judges to send him to the Quarterfinals, eliminating him from the competition along with Oleksiy Mogylnyy, instead of Vita Radionova. 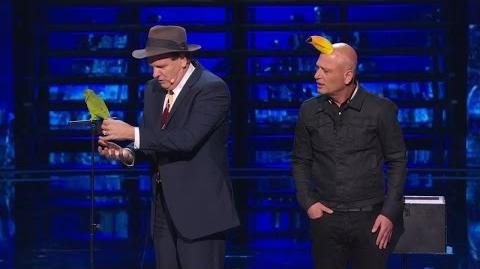