Daniel & Syum were a juggling duo act from Season 10 of America's Got Talent. They were eliminated in the audition round.

Daniel and Syum both currently live in Las Vegas. Both are taxi drivers. Daniel is from the east coast, and Syum was born in Ethiopia. Daniel Mann is a actor, comedian, mime, juggler. and a professional dancer. Mann has over 2,215 videos on YouTube and Dan was on the Travel Channel for two months, in a show was called "America Caught On Camera in Vegas." [1]. Syum Tysfy is from the Ethiopian circus. [2]

Daniel & Syum's audition in Episode 1005 consisted of juggling to Buster Poindexter's "Hot Hot Hot". Unfortunately, Daniel faltered in the middle of the performance and recovered by balancing a hat on his nose and dancing. Howard Stern, Heidi Klum and Howie Mandel buzzed the act. Although Mel B voted yes (based solely on the song choice), the other three judges voted "No," eliminating the duo from the competition. 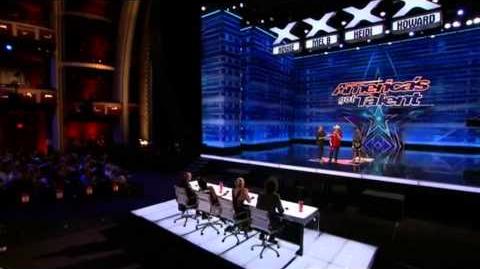 Retrieved from "https://agt.fandom.com/wiki/Daniel_%26_Syum?oldid=55703"
Community content is available under CC-BY-SA unless otherwise noted.