Judge Cuts
Daniel Sullivan was an aerialist act from Season 10 of America's Got Talent. He was eliminated before the Judge Cuts.

Daniel Sullivan, feet of flame, hair of fire, is traditionally trained in Irish Step Dancing since the age of four. At the age of 10, he started performing on a variety of aerial apparatus. Daniel wanted to branch out, extend those arms, and explore the world of circus. It was his five consecutive years touring with Circus Smirkus where he developed his passion for aerial hoop, circus ring, and basically everything circular. From 2006-2010 he toured with Circus Smirkus, the only international youth circus in North America.

During his time at Colorado Academy, the high school of which he graduated from, Daniel was juggling a multitude of extra curricular activities. Irish Step Dancing gave him the musicality, agility, and rhythm, rock climbing gave him the biceps, and his joy of life gave him the smile. After graduating high school, he simultaneously attended the San Francisco Circus center, enhancing his craft, and studied dance at the University of San Francisco. Daniel was soon accepted into Montreal’s prestigious L’École nationale de cirque (National Circus School) where he trained under Nathalie Hebért. [1]

Daniel Sullivan's audition in Episode 1006 consisted of performing feats on the aerial hoop such as hanging on the hoop by his feet, dancing with one hand on the hoop, and moving with the hoop's ring between his legs. Heidi Klum, Mel B, and Howie Mandel voted "Yes," sending Daniel to the Judge Cuts round. 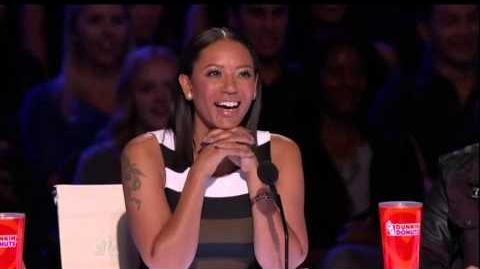 Daniel Sullivan did not perform in the Judge Cuts round, meaning he either withdrew or was cut by the judges before this stage of the competition.