None
Danny Palumbo was a stand-up comedian act from Season 11 of America's Got Talent. He was eliminated in the audition round.

Danny Palumbo is a stand-up comedian by way of Austin, by way of Pittsburgh. In 2015 he won the 30th annual Funniest Person in Austin contest. That same year, Splitsider named Danny one of the top up-and-coming comedians outside of NY and LA. He also co-created the satirical fine dining websites lilbuco.com and abbrevsrestaurant.com, the latter of which was described by the Austin Chronicle as "Best-of-The-Onion-level funny." Danny has been invited to perform at the Moontower Comedy Festival, Fun Fun Fun Fest, Funny or Die's Oddball Fest in Austin, Austin Sketch Fest, and the Big Sky Comedy Festival. He has also been featured on NPR, ABC News, and Eater. You can see Danny make his television debut on Fuse's Uproarious this summer. [1]

Danny Palumbo's audition in Episode 1102 consisted of joking about calling his mother, but her not answering. Simon Cowell buzzed the act. Howie Mandel, Mel B, and Simon voted "No," eliminating Danny from the competition. 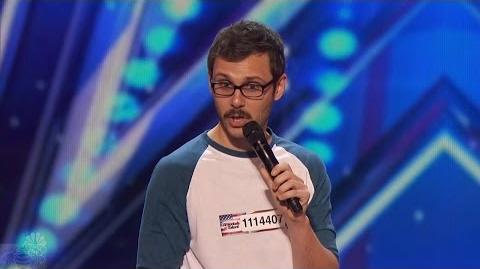