Darby was a stunt cheerleader act from Season 8 of America's Got Talent. She could not attend the Vegas Round because she received a concussion (unrelated to stunting), so she was automatically eliminated.

Darby Leetch got her start in cheerleading very early in life. Her mom, who is the program manager at Ultimate Athletics, actually went into labor at the gym. With some help from industry greats such as Robby Gregory, “tumbling extraordinaire,” Darby learned to roll over at 3 months and was getting stretched daily by GymTyme All-Stars’ Kristen Sutherland. It wasn’t too long after Darby learned to walk that UA’s Owner Craig El had her standing in a cupie. Darby loved the feeling of being held high in the air and would wave to all around her saying, “I’m taller than you now!”

When she was around 2 years old, Darby’s real stunt training began when one of UA’s former coaches, Earl Lambert (who is now program director at Cheer Tyme All Stars in Chantilly, Va.), started teaching her how to do extended body positions and several coed transitions. At 3 years old, Darby was able to join a Tiny team, and her partnership with Kyle Marnell began. Kyle was one of the coaches of Darby’s Tiny team and he would always teach by example. Kyle and Darby would do the stunts together before teaching them to the team. From practicing Tiny Level 1 stunts, they progressed to more difficult tricks such as: double downs, cherry pies, high-to-high tick tocks, double-ups, kick-kick double baskets and double full baskets.

Just before The Cheerleading and Dance Worlds in April, one of the producers from “America’s Got Talent” called Ultimate Athletics looking for contact information for their power tumbling team. They also asked about any other areas of interest UA might have for the upcoming season. A video of Darby and Kyle was sent in. Having never seen the show before, Darby didn’t know what to expect. Much of the process was a whirlwind of phone calls with the producers to begin scheduling the filming of and interview.

Some of Darby's future goals include becoming an Nfinity Legend and winning a coveted NCA jacket. When asked in a recent pageant interview, “If you could win an award for anything, what would it be?” Her response was a confident: “I want to win a Worlds ring with all of my friends!” [1]

Darby's audition in Episode 803 consisted of performing acrobatic feats such as standing on one foot on her coach Kyle's hands with her other foot raised above her head and performing a flip in midair. Howard Stern, Heidi Klum, Mel B, and Howie Mandel all voted "Yes," sending Darby to the Vegas Round. 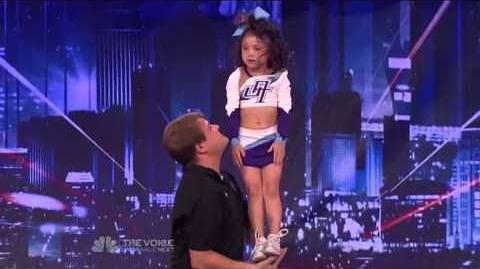 Darby apparently withdrew from the competition before the Vegas Round.

Retrieved from "https://agt.fandom.com/wiki/Darby?oldid=104086"
Community content is available under CC-BY-SA unless otherwise noted.