America's Got Talent Wiki
Register
Don't have an account?
Sign In
Advertisement
in: Acts, Accepted Acts, Instrumentalists,
and 12 more

Quarterfinalist
David "Dave" Johnson was a comedic singer/guitarist act from Season 4 of America's Got Talent. He was eliminated in the Quarterfinals.

David Johnson, who is from Renton, Washington, is a loan officer at a credit union. He has been playing guitar since high school. He once wrote a song about someone he had a crush on from Baywatch.

David Johnson's audition in Episode 401 consisted of singing about his crush on David Hasselhoff and Hasselhoff's filmography while playing the guitar. Piers Morgan and David both buzzed the act. Although Sharon Osbourne voted "No," Piers and David both voted "Yes," sending David to the Vegas Round. 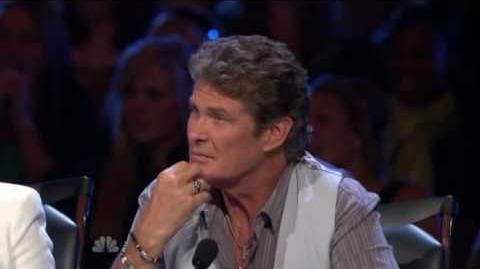 David Johnson appeared without performing in the Vegas Round. His audition was strong enough for the judges to send him to the Quarterfinals in Episode 411.

David Johnson's Quarterfinals performance in Episode 417 consisted of singing a song about The Golden Girls. Piers Morgan, Sharon Osbourne, and David Hasselhoff all buzzed the act. Dave did not receive enough votes to be sent to the Semifinals, eliminating him from the competition in Episode 418 along with Jay Mattioli, instead of Lawrence Beamen.