Dave the Horn Guy, also known as Dave "The Horn Guy" Enns, was a horn performer act from Season 1 of America's Got Talent. He was eliminated in the Semifinals.

Dave the Horn Guy is Dave Enns, a musician’s musician and a guy with a lot of horns. His innovative spirit and musical genius have led him to perform all over the country, from the Tonight Show with Jay Leno to major sporting event half time shows and national corporate events. Enns holds multiple music degrees. At 37, his full time musical efforts have found him to be a Billboard recognized songwriter, a studio musician, an orchestrater of over 200 songs, a regular giggin’ trombone/piano player, singer, and a founder/producer of an award-winning urban acappella group. He’s combined these experiences with 25 chromatically tuned bulb-horns, custom made from a top-of-the-line German horn maker to create “Dave the Horn Guy.”

Dave purchased 10 standard bicycle horns from the bike aisle at Wal-mart. He cut them all in half, fussed with the reeds, found some vinyl tube length from Home Depot, and made a scientific chart to achieve one major scale plus a few blue notes. Dave added some straps, zip ties, eyelets, key rings, fasteners, hose clamps, and bands to hold the horns in place. Arm pits, knee pits, neck pit, elbow pits, back, shins, chest, thighs, and more. All ready to go, he put together a version of Jingle Bells that provided an adrenaline rush of amazement and laughs. [1]

Dave the Horn Guy's audition in Episode 101 consisted of playing around 25 bicycle horns attached to his suit and performing songs like "Frère Jacques." At one point, he performed as an "emcee." Although Piers Morgan voted "No," Brandy Norwood, and David Hasselhoff both voted "Yes," sending Dave to the Semifinals. 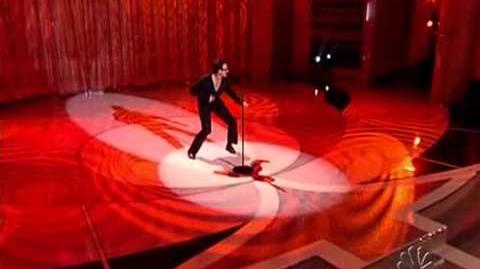 Dave the Horn Guy's Week 2 Semifinals performance in Episode 106 consisted of playing the 25 bicycle horns attached to his suit to perform "Play That Funky Music" and patriotic songs. Piers Morgan, Brandy Norwood, and David Hasselhoff all gave Dave "X" votes. Dave did not receive enough votes to finish in at least second place in America's Vote, eliminating him from the competition in Episode 107 instead of At Last and Natasha Le.

Dave the Horn Guy competed on the short-lived 2008 version of The Gong Show, where he won his episode, beating out fellow America's Got Talent acts Justin Rivera and Tic & Tac Entertainment.

Dave also competed on Season 11 of Britain's Got Talent, where he was eliminated in the Judge Cuts.

Retrieved from "https://agt.fandom.com/wiki/Dave_the_Horn_Guy?oldid=133426"
Community content is available under CC-BY-SA unless otherwise noted.