America's Got Talent Wiki
Register
Don't have an account?
Sign In
Advertisement
in: Acts, Season 13 Acts, Acrobats,
and 5 more

Unknown
David Pereira is an acrobatic dancer act from Season 13 of America's Got Talent. It is unknown whether or not he continued in the competition.

David Pereira was born in Vigo, Spain on July 11, 1990. His performance is based on physical art, dance, theatre, circus, cabaret, and Pereira's own and unique way of moving and feeling. ​ His work has been seen by over 20 million of people worldwide. Winning the love of the audience in France's Got Talent where he was the third finalist, and second finalist in the German tv show 'Got To Dance'. His professional journey started at age 18 working for 'Cirque du Soleil' in an event in Lecce/Italy.

Short after this event with 'Cirque du Soleil' David decided to leave his hometown and conquer his dreams and moved to Fuerteventura/Spain to work with the choreographer 'Tizziana Mino'. David performed during 5 months around the island in hotels. There David met 'Base Berlin', a collaboration of artists based in Berlin and founded by Markus Pabst and Pierre Caesar. David created his first acrobatic act 'Twilight', played with a supermartket cart, together with 'Base Berlin'. 'Twilight' is one of the most known acrobatic acts in the world.

After 'Twilight' came a comedy hula hoop act on high heels, aerial silks, aerial disco ball... At age 22 Pereira created together with 'Base Berlin' his own show 'David Pereira's Trip' Named best show in Berlin in 2013 by the queer Berlin magazine 'Siegessäule'. 'The Trip' is an iconic show in Berlin and played during 4 consecutive years at the renowned 'Wintergarten Berlin'. 'The Trip' starring David Pereira & Jack Woodhead also toured Australia, 'The Famous Spiegeltent', with a sold out show during 3 weeks and the applause of the critic, 'Sziget Festival' in Budapest, and at Europe's biggest variety theatre house 'GOP Varieté' in Hannover.

David wrote in 2014 together with Markus Pabst, and Jack Woodhead the acclaimed acrobatic musical 'Der Helle Wahnsinn' Winner of the 3rd place for the best theatrical production in Berlin 2014. David Pereira wrote the lyrics and starred as 'Punka Rosa'. David went on to be part of productions like 'CATS' playing Mr. Mistoffelees at Freilichtspiele Tecklenburg the operetta 'Il Mondo della Luna' at Salzburger Landestheater or the musical 'Big Fish', where David played a mermaid and a circus artist, directed by the renowned director Andreas Gergen. ​ David Pereira also models for magazines and photographers like Robert Pater, Bertil Nilsson, Tan Kadam, Lutske Veenstra, Joan Crisol.

David Pereira's audition in Episode 1305 consisted of performing a contemporary dance routine with a shopping cart. Although Howie Mandel and Heidi Klum praised the performance, it is unknown whether or not David continued in the competition. 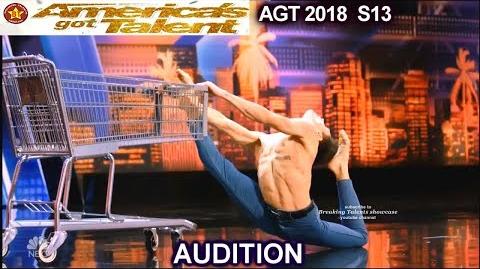