Judge Cuts
Delighted Tobehere was a drag singer act from Season 10 of America's Got Talent. She was eliminated before the Judge Cuts.

Delighted Tobehere is a 7 foot tall drag queen, entertainer, celebrity illusionist, emcee, live vocalist, activist, and comedian based in Charlotte, North Carolina. Delighted was deemed Broadway's Best In Drag in 2015 and QList Best Drag Queen in Charlotte in 2009, 2010, 2011, 2013, and 2014. [1]

Delighted Tobehere's audition in Episode 1007 consisted of singing Josh Turner's "Your Man" in a dress. Howard Stern, Heidi Klum, Mel B, and Howie Mandel all voted "Yes," sending Delighted to the Judge Cuts round. 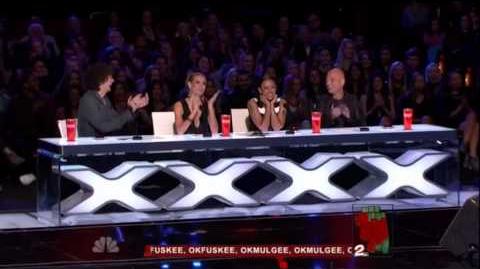 Delighted Tobehere did not perform in the Judge Cuts round, meaning she either withdrew or was cut by the judges before this stage of the competition.