Semifinalist
Desperation Squad was a band act from Season 1 of America's Got Talent. It was eliminated in the Semifinals.

Desperation Squad is from Pomona, California. It has been performing for over 20 years.

Desperation Squad's audition in Episode 101 was never televised, but according to its website (link), they performed their original song "You Suck." Although Piers Morgan voted "No," Brandy Norwood and David Hasselhoff both voted "Yes," sending the group to the Semifinals.

Desperation Squad's Week 4 Semifinals performance in Episode 110 consisted of singing "Band," an original song. Although David Hasselhoff gave the band a "✓" vote, Piers Morgan and Brandy Norwood both gave it "X" votes. Desperation Squad did not receive enough votes to finish in at least second place in America's Vote, eliminating it from the competition in Episode 111 instead of Celtic Spring and David & Dania - Quick Change. 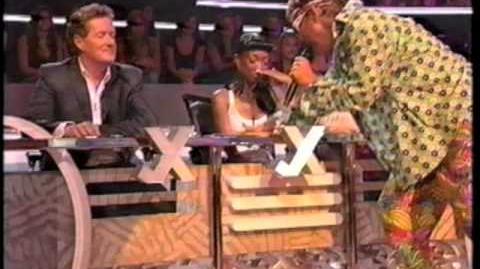