Judge Cuts
Dominique Dy was a singer/pianist/guitarist act from Season 11 of America's Got Talent. She was eliminated in the Judge Cuts.

Dominique Dy is from Nashville, Tennessee. She arranges songs and often accompanies her voice with the sounds of acoustic guitar or piano. [1]

Before finally being televised on Season 11, Dominique competed on America's Got Talent twice before; in Season 8 (eliminated in the auditions), and Season 9 (eliminated before Judgment Week). She was also one of the 20 YouTube finalists that had a chance to enter the competition in Season 7. [2]

Dominique Dy's audition was never televised. It is unknown whether or not she was buzzed, but at least three judges voted "Yes," sending Dominique to the Judge Cuts.

Dominique Dy's Judge Cuts performance in Episode 1109 consisted of singing her version of Bruno Mars' "When I Was Your Man" while playing the piano. Dominique's performance was not strong enough for the judges to send her to the Quarterfinals, eliminating her from the competition instead of Daniel Joyner. 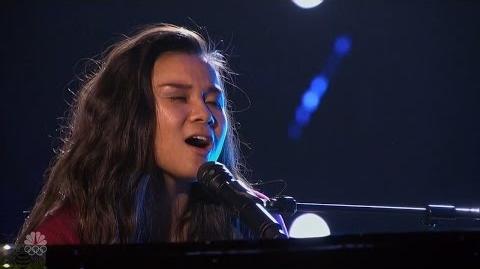