Doppelganger Circus Sideshow was a sideshow act from Season 7 of America's Got Talent. It was eliminated in the audition round.

The Doppelganger Circus Sideshow is one part Adam Arcana and one part Rachel Rampage joined by a twisted need to perform the most barbaric art forms of sideshow, combining forces with one goal in mind: to take their unearthly set of skills to the masses. Rising in the ranks phenomenally fast having played from bar rooms to casino's to being invited to appear on television programs, they shove real metal nails up their nose, walk over glass, straightjacket escapes, swallow razor blades and even electrocute themselves or play with a chainsaw, 'cause knives just aren't dangerous enough. 1

The Doppelganger Circus Sideshow's audition in Episode 708 consisted of Adam using a chainsaw to carve an "H" onto an apple being held in the mouth by Rachel (who got lockjaw as a result of the apple's size after the audition). Howard Stern buzzed the act. Stern, Sharon Osbourne, and Howie Mandel all voted "No," eliminating the act from the competition. 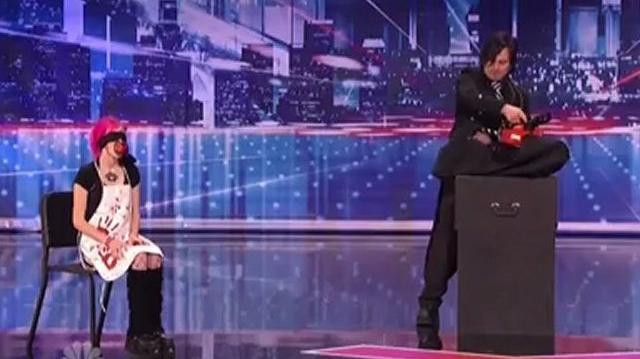 Retrieved from "https://agt.fandom.com/wiki/Doppelganger_Circus_Sideshow?oldid=91267"
Community content is available under CC-BY-SA unless otherwise noted.