America's Got Talent Wiki
Register
Don't have an account?
Sign In
Advertisement
in: Acts, Rejected Acts, Season 8 Acts,
and 5 more

Auditions
Dr. Bob Baker was a ventriloquist from Season 8 of America's Got Talent. He was eliminated in the audition round.

Bob Baker is from Manhasset, New York, on Long Island. He is a gastroenterologist. Bob taught himself to “throw his voice” at the age of 9 after seeing Chicago ventriloquist Terry Bennett on television. Bob also learned magic, mentalism, and hypnosis. All these skills led to his performing in clubs, restaurants, and resorts--and helped him pay his college and medical school bills.

Since 1982 he has been practicing internal medicine and gastroenterology in Great Neck, NY. He has authored a book for patients on preparing for surgery and has written several scientific papers. In 2008 Bob returned to comedy, and by 2010 he was a finalist in the “Long Island’s Funniest Comic” contest. He has won rave reviews for his new restaurant show “Close-Up Comedy with Bob Baker & Friends.” In 2011 and 2012 his performances made him the talk of the convention at the International Ventriloquists Association. Bob donates all his performance fees to charity.1

Dr. Bob Baker's audition in Episode 807 consisted of performing with his puppet, Sigmoid Colon, jokes about colons such as a colon being cut in half becoming a semicolon. Howard Stern was barred from voting because Bob was actually a personal doctor (Bob even performed Howard's colonoscopy). Heidi Klum, Mel B, and Howie Mandel all voted "No", eliminating Bob from the competition. 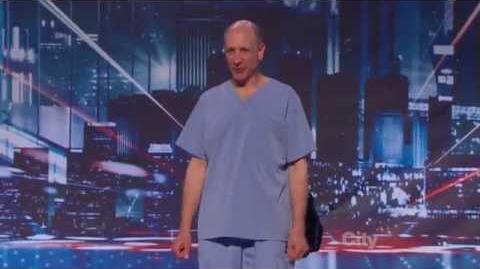 Dr. Bob Baker is only one of two known acts so far (the other being Timber Brown) in which a judge abstained from voting in their audition due to a personal relationship with the contestant.