America's Got Talent Wiki
Register
Don't have an account?
Sign In
Advertisement
in: Accepted Acts, Acts, Magicians,
and 8 more

Drew Thomas was a magician act from Season 4 of America's Got Talent. He was eliminated in the Semifinals.

Drew Thomas designs, illustrates, engineers, and builds the impossible. He is both the producer and star of the Drew Thomas Magic brand, bringing his signature to illusions and creating a blueprint for entertainment that cannot be replicated. The power and originality of his productions have been honed through more than 6000 live performances—upwards of 500 performances a year as show creator and illusionist.

Drew has forged strategic alliances with corporate names that include NASCAR, Harley-Davidson, Six Flags, SeaWorld, and Universal Studios Halloween Horror Nights for the “Carnival of Carnage.” He has several Broadway-caliber shows under his belt, including innovative performances of “The Nutcracker” in various cities. His longest running hit, “Now You See It” on the Royal Caribbean’s Freedom of the Seas consistently ranks as the cruise line’s highest ticketed show.

Recently, Drew surpassed even his own accomplishments with a full evening of performances as the emcee, opening act, intermission act, and grand finale of the 2013 Event Solutions Spotlight Awards in Las Vegas. He was handpicked by the producer to be the “glue” of the show. 1

Drew Thomas's audition in Episode 402 consisted of creating the illusion of three curtains coming to life, himself disappearing into a seemingly empty box, and three assistants and Drew himself appearing out of the curtains. Piers Morgan, Sharon Osbourne, and David Hasselhoff all voted "Yes", sending Drew to the Vegas Round.

Drew Thomas Magic appeared without performing in the Vegas Round. His audition was strong enough for the judges to send him to the Quarterfinals in Episode 411 instead of Joseph Constantine & KC.

Drew Thomas Magic's Week 1 Quarterfinals performance in Episode 413 consisted of creating the illusion of three women being locked into a crate, Drew himself being locked into a smaller crate; the smaller crate being elevated 8 feet up, the small crate exploding, the larger crate being opened and revealing the girls having been replaced with three men, and the welders being revealed to now be the women. Drew then re-appeared behind the judges. Drew received enough votes to be sent to the Semifinals in Episode 414 instead of Lake Houston Dance and Manuela Horn.

Drew Thomas Magic's Week 1 Semifinals performance in Episode 421 (aired September 1, 2009) consisted of performing an illusion where three women hid behind a curtain, and when Drew revealed them, they had become dolls held by his daughter Olivia. Piers Morgan buzzed the act. Piers commented that the act wasn't original and was too boring, but Sharon praised the trick and Hasselhoff the performance. Drew did not receive enough votes to be sent to the Finals, eliminating him from the competition in Episode 422 along with Arcadian Broad, instead of The Texas Tenors. 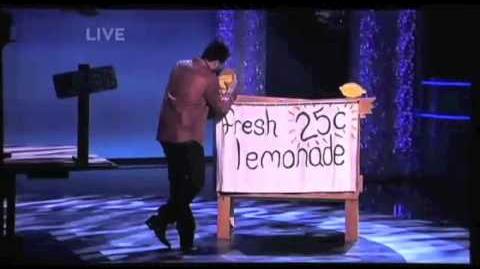 Drew Thomas Magic auditioned again in Season 7. The act was not televised, but this time, he failed to make it past the auditions.

Drew Thomas Magic was the first act to make the Live Shows to be rejected in a future season he was followed by Popovich Comedy Pet Theater,Elektro Botz and Erik and Shelly. Coincidently both Erik Linder and Drew were eliminated in the Season 4 Semifinals.