Judge Cuts
Duo Catalexi was an aerialist duo act from Season 10 of America's Got Talent. It was eliminated before the Judge Cuts.

The duo Catalexi consists of Catherine Audy and Alexis Trudel, two dynamic and ambitious artists. Together, they provide sensuality, romance and grandeur, all to move and surprise their public.

Their duet was created in 2009 with in the Circus School of Quebec, where they graduate from the professional formation in 2012. Since then they travel around the world participating many renowned events, including internationally acclaimed show Cavalia. Their non-stop efforts to stand out were well rewarded, in 2013, when they proudly won the bronze elephant at the International Festival del Circ, in Spain.

They are always looking to excel and to give out the best of themselves, making them artists who have a lot to offer within a show. [1]

Duo Catalexi's audition in Episode 1007 consisted of performing acrobatics on the aerial silks. Their verdict was not televised, but although Mel B voted "No", Heidi Klum, Howie Mandel and Howard Stern voted "Yes," sending Duo Catalexi to the Judge Cuts. 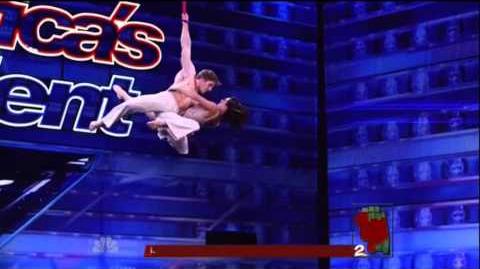 Duo Catalexi did not perform in the Judge Cuts round, meaning they either withdrew or were cut by the judges before this stage of the competition.