Judge Cuts
Duo Maelan was a hand balancer duo act from Season 10 of America's Got Talent. They where eliminated in the audition round.

Caty Mae started her training in Los Angeles, by accident when someone noticed her pointed toes during a set of pull-ups in Muscle Beach in Santa Monica, CA. Not long after her first silk class, she was enrolled in a full time aerial training program under the mastery of Cirque du Soleil coaches, Rachel Walker of Kooza and Sarah Steben of Saltimbuca. Almost immediately after she left school, her career took flight. She has since performed at many fairs, benefits, concerts, and special events across the country. She has also worked with high profile stars like Macy Grey and studied silks in the same school as P!nk.

Nick Milan started his acrobatics training as a Tandem Surfer in Honolulu, Hi. He soon joined the Wakiki Acrobatic Troupe where he found his passion for performance and partner acrobatics.

When Milan moved to Austin, TX, he began working with the circus troupe, Crash Alchemy. It wasn't long before Milan and Mae met and began to fuse thier acrobatic and aerial worlds. Thier combined talants and unique training backgrounds have led them to breath life into original works of circus artistry both in the air and on the ground. [1]

Duo Maelan's audition in Episode 1007 consisted of performing hand balancing feats such as Nick holding Caty with one hand as she did the splits. Although Heidi voted "yes". Howard, Mel B and Howie Voted "no", sending the duo home. 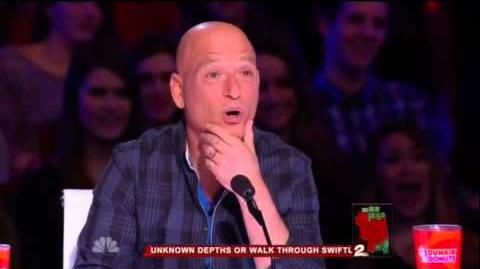