America's Got Talent Wiki
Register
Don't have an account?
Sign In
Advertisement
in: Acts, Acrobats, Accepted Acts,
and 6 more

Judge Cuts
Duo Non Stop was a rolla bolla duo act from Season 13 of America's Got Talent. They were eliminated before the Judge Cuts.

Duo Non Stop is performed by Sergey and Ekaterina Melashchenko, talented professional artistes based in the Ukraine.


Sergey was born in Artemovsk. In 1996 he attended Galaxy Circus School as a student. In 2002 he launched as a professional circus performer in Kobzov Circus where he met his future partner and wife Ekaterina. Ekaterina was born in Kiev and with dancing as her passion she became a dance teacher for very young children before coming to the Circus School in Kiev.


Their production provides insight into the ever changing relationship of a man and a woman while they are raising the stakes higher and higher.


The vaults, which are performed by them on shaky structures, are only the beginning, as is the case for all of us in our real lives. Totally neglecting the laws of human body and nature, the breathtaking act of the programme is transformed into the Art Of Trust by the duo.[1]

Duo Non Stop's audition in Episode 1304 consisted of both partners balancing on an unstable board on-top of a cylinder. The verdict was not televised, but Howie Mandel, Mel B, Heidi Klum, and Simon Cowell all voted "Yes", sending them to the Judge Cuts. 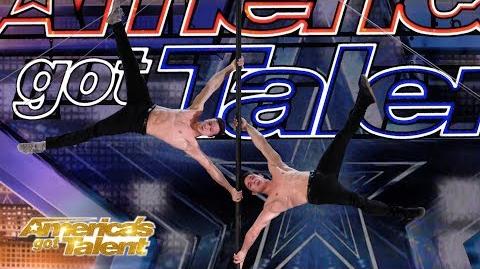 Some of the great ACTs - America's Got Talent 2018
Audition

Duo Non Stop confirmed that they did not make the Top 72 shortlist. [2]