Judge Cuts
Duo Vladimir was a hand balancer duo act from Season 10 of America's Got Talent. It was eliminated in the Judge Cuts.

Both of the acrobats of Duo Vladimir are named Vladimir. From Ukraine, the duo learned sport acrobatics when they were kids. By their audition, they had been performing with each other for seven years. Both have families; one has a son and another a daughter. The duo travels a lot to perform, and they find being away from their family difficult.

Duo Vladimir's audition in Episode 1003 consisted of hand balancing feats such as a one-arm handstand hand-on-hand and balancing knives in their mouthes on top of each other. Howard Stern, Heidi Klum, Mel B, and Howie Mandel all voted "Yes," sending the duo to the Judge Cuts round. 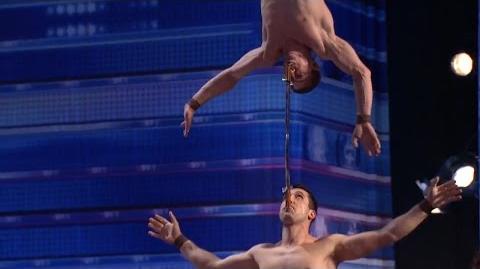 Duo Vladimir's Judge Cuts performance in Episode 1011 consisted of hand balancing feats such as one Vladimir turning on the ground while the other Vladimir did a one-arm handstand on his head. The duo then performed their sword balancing again. Heidi Klum and Howie Mandel gave the duo standing ovations. The duo's performance was not strong enough for the judges to send it to the Quarterfinals, eliminating it from the competition instead of Duo Volta. 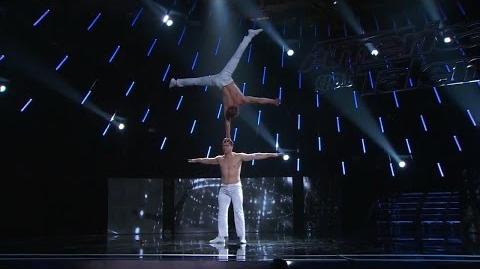 In 2019, Duo Vladimir competed on the World's Got Talent special held in China. They were eliminated in the Preliminaries after being knocked out by Chinese nature vocalist Fang Haoran.