Withdrew
Duo Volta was a static trapeze duo act from Season 10 of America's Got Talent. They withdrew from the competition. [1]

Adrienne Jack-Sands is a multifaceted circus performer specializing as a duo trapeze flyer but also performing as a soloist on straps, hoop, single-point trapeze, rope and silks. Classically trained as a ballerina, her poise and flexibility lend an air of sophistication to her acrobatic work. She has graced stages around the world since 2008. Before discovering aerial acrobatics, Adrienne studied dance at the American Ballet Theatre school in New York City. She trained extensively in classical ballet as well as contemporary and jazz dance. She has played the violin since the age of six, the viola since 12, and has even dabbled in the musical saw and the ukulele. In addition to her duo trapeze work with Oliver and international solo aerial work, she is a member of The Original Aerial Girl-Gang, The Aerialistas. [3]

After his first swing on a flying trapeze several years ago, Oliver was hooked and started training to become a catcher under the tutelage of Brian Flint. It wasn’t long before he was catching advanced students and became known for his crushing grip. He began basing on static duo trapeze shortly thereafter, working with various flyers before he met his match with Adrienne. Before discovering circus arts, Oliver was always involved in some sort of physical endeavor. He competed for several years in mixed martial arts, and in 2010 he won the Sudden Impact Light Heavyweight Championship by submission due to strikes. As a full back for the University of Kansas rugby team, he was named to the All Big 12 Tournament team each year and represented both the Heart of America and Western Collegiate All-Stars. After a year playing in the Queensland premier league in Brisbane Australia and a total of 10 years on the field, he was forced to retire due to knee injuries. [4]

Duo Volta's audition in Episode 1007 consisted of performing acrobatic feats on the trapeze such as Oliver hanging on the trapeze and holding Adrienne by the hands as she performed successive midair front flips. Howard Stern, Heidi Klum, Mel B, and Howie Mandel all voted "Yes," sending the duo to the Judge Cuts round. 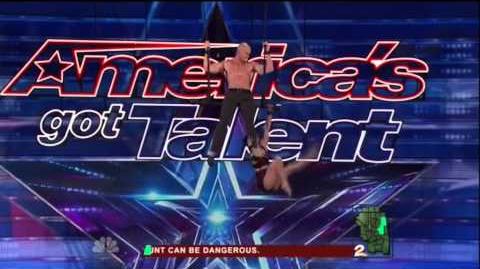 Duo Volta's Judge Cuts performance in Episode 1011 consisted of performing acrobatic feats on the trapeze such as Oliver hanging on the trapeze and holding Adrienne by the hands as she performed successive midair front flips, backflips. Oliver also held onto Adrienne by one foot. Banks' "Beggin for Thread" played in the background. The duo's performance was strong enough for the judges to send it to the Quarterfinals instead of Duo Vladimir. 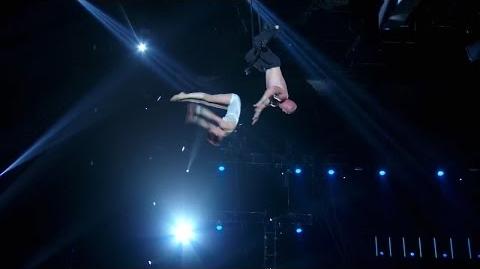 Duo Volta broke their partnership and, as a consequence, withdrew from the competition before the Quarterfinals began.

Adrienne married Paul Tracogna and together formed the duo The Owl and The Pussycat. The duo would compete on Season 16 where they would withdraw from the competition.