EXISDANCE was a multimedia dance act from Season 13 of America's Got Talent. They were eliminated in the Judge Cuts.

EXISDANCE is a Creative team Collaboration with performance / creation / technology based in TOKYO represented by a small square-shaped robot who has "hacked" and taken control of a human's body [1] .

EXISDANCE's audition in Episode 1306 consisted of the solo dancer performing a dance routine using images from the projection screen in the background, with the projections being motion-tracked onto his body. The music used during the performance was Josh Money's "The Apparatchik". The verdict was not televised, but, at least, three judges voted "Yes," sending EXISDANCE to the Judge Cuts. 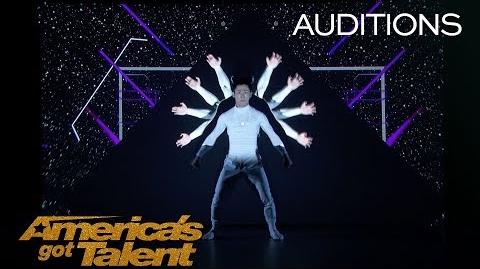 EXISDANCE's Judge Cuts performance in Episode 1308 consisted of the human dancer performing a dance routine while including the small square robot in the routine, spinning it around and projecting it onto the screen at a larger size. EXISDANCE's performance was not strong enough for the judges to send them to the Quarterfinals, eliminating them from the competition, along with Shannon and Reckon and Vivien Vajda. 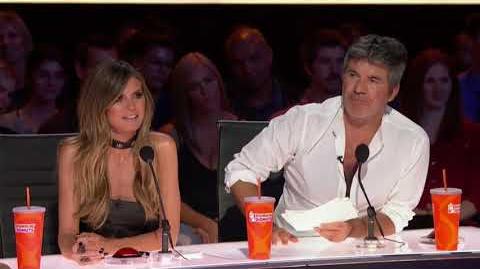 Retrieved from "https://agt.fandom.com/wiki/EXISDANCE?oldid=147275"
Community content is available under CC-BY-SA unless otherwise noted.